What's the common name for this button?

I'm trying to find out what is the way to call this kind of button: 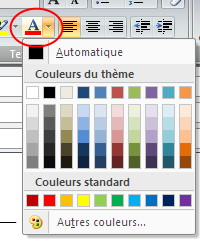 To be precise, I'm talking about a button which acts like a regular one for most of its area, but has also a "more" area, usually presented with an arrow. Clicking this other area opens a popup allowing to pick another action then the current one (in the screenshot case, a different color, but could be something else). After selecting another item in this popup, it becomes the default action, for the next time the main button area is pressed.

What would be the common way to call such type of button?

Split buttons Use a split button to consolidate a set of variations of a command, especially when one of the commands is used most of the time.

Unlike a menu button, clicking the left portion of the button performs the action on the label directly. Split buttons are effective in situations where the next action with a specific tool is likely to be the same as the last action. In this case, the label is changed to the last action, as with a color picker:

@Tims comment is probably the most accurate answer, but this adds weight to it being a 'common' name.

If you want to use them in a Website, the Twitter Bootstrap web framework has them and also refers to them as 'Split Buttons':

Split buttons feature a standard action on the left and a dropdown toggle on the right with contextual links.

It could be DROP DOWN BUTTON.

Not the answer you're looking for? Browse other questions tagged buttons terminology or ask your own question.

12
Alternatives to the "play/pause" button
7
Why do many/most (Android) phones have the power button opposite the volume buttons?
5
Indicate that a button doesn't take immediate action
35
What's the common name for this GUI element? (left-right box, assignmentbox, relationbox)
2
Close menu after action was picked?
2
Action button placement different for modals than base screens
0
How to indicate that clicking a photo will open a slideshow?
0
Button Behavior and when to trigger on release
94
Should I have a disabled button or no button at all, if the user doesn't have sufficient privileges for the action?