Ask Question
Asked 9 years, 4 months ago
Modified 9 years, 4 months ago
Viewed 573 times
8
This question is unlikely to help any future visitors; it is only relevant to a small geographic area, a specific moment in time, or an extraordinarily narrow situation that is not generally applicable to the worldwide audience of the internet. For help making this question more broadly applicable, visit the help center.
Closed 9 years ago.

Firefox has changed a lot after version 3. I personally think the main reason is the advent of Google Chrome.

Why did these changes come along? Why does Firefox have to emulate Chrome? Is it the new way is really better?

However shouldn't the developers think more about their old users and keep things work as they worked before? Shouldn't a huge change in UI bring bad UX?

Jennifer Morrow (part of the Firefox user experience design team) wrote a pretty detailed blog post about removing the Firefox status bar in 2010. As already mentioned, the aim was to remove the unnecessary "chrome" from the Firefox UI. I'd recommend you read the whole post. A short extract:

The goal is to find places where chrome can be minimized, both through efficient redesign and pure removal where functionality just isn’t providing enough benefit. This process led us to an obvious candidate for chrome reduction: the status bar. In addition to taking up page content, the status bar is the only part of Firefox’s permanent UI located on the bottom of the browser. This placement leads to the status bar being easily obscured, and sometimes requires resizing the window to view. For an entire toolbar of UI, it seems this slacker may not be pulling its weight in usefulness.

It is possible to re-introduce the status bar through an add-on.

I think it would be naive to think that the browser developers/designers don't compare their product with the competition. Jennifer makes reference to Chrome's UI design choices as early as Feb 2009 in her post "UI redundancies":

This is an observation more than a criticism, but have you ever noticed how many redundancies occur in Firefox? Chrome’s tack has been to eliminate some of these and scrap the interface down to the bare minimum, which is probably going too far, but perhaps there are ways to clean the UI in places without sacrificing functionality or usability.

When it comes to tabs, the Mozilla team is doing lots of interesting research to determine how users use tabs. One example that may provide an answer to your tab question is found in how many new tabs users create each day:

Using Mozilla Test Pilot, we began to research how Firefox users use New Tabs. What we learned is that each day, the average Firefox user creates 11 New Tabs, loads 7 pages from a New Tab, and visits two unique domains from a New Tab. The average New Tab loads two pages before the user closes or leaves it.

Although the above extract comes from a post in 2012 on the redesign of the home and new tabs, I believe they had an intuition that people would be more likely to use tabs, than not use tabs (hence keeping the tab-bar visible at all times).

The add-on manager has many blog posts dedicated to its redesign. The rationale for making it a tab is briefly mentioned in a December 2010 post:

Instead of managing your add-ons in a small, separate window, the add-ons manager now loads in a tab. This means it won’t be so small and easily lost among other windows, and you can interact with it identically to other tabs, including resizing and moving.

Lastly, you might find the following worthwhile as an answer to your question: Alex Faaborg (another one of Mozilla's designers, although he has since left the company) gave a talk at PARC in 2011 titled "Designing Firefox" (link to his blog, where you will find various download links to the video). It was presented during the transition from Firefox 3 to 4, where a lot of the UI changes started to take place. Here is a short introductory text by Steve Williams:

While much open source software suffers from poor design and usability, Firefox shines. What makes the Mozilla community different? With great branding, usability backed up by research but tempered by realism, and a powerful extension architecture, the Firefox web browser claims 400 million users. On the eve of the release of Firefox 4, Mozilla designer Alex Faaborg covers the unique challenge of coordinating user experience design in an open source community, important features of past versions, and the future of the Firefox interface.

Overall I believe a lot of thought is put into the UI changes, and it is worth keeping an eye on the blogs of these UX teams.

Edit: I noticed that someone else asked a similar question about Firefox's last tab before here at UX.SE, so the answers to that post may be relevant as well.

Chrome was a major change in browsers. The major change it brought was screen space. Where IE and FF came from desktop apps and windows Chrome removed a significant amount of the 'Chrome' surrounding the window. The only thing it cared about was getting as much of the Web page displayed as possible. Chrome was backed by Google and achieving massive growth (I'll post some proper figures later).

FF has seen this and did what all phone manufacturers have done with the iPhone which is to copy it. They've invested heavily in the UI and done a good job of keeping pace with Chrome. If they hadn't they'd have gone the way of Netscape. IE have chosen to badly copy Chrome and IE9 still sucks. They've had to rethink windows to come up with IE10.

FF does have some cash from Google but I suspect nothing like Chrome or IE funds, so I think they've done a fine job of keeping the core of FF eg all the plugins especially Firebug, enhancing the download manager and making it beautifully simple to change themes, whilst taking on some of the ground breaking UI changes in Chrome.

I've seen complaints with every UI change FF has made, there's more complaints to come as they try to merge the UI for mobile desktop and tablet, but it seems to me that they are very much on the front edge of UI development so they simply can't stand still and keep all their existing users happy.

Here's the growth chart of Chrome since 2008 when FF 3 was released its basically exponential: 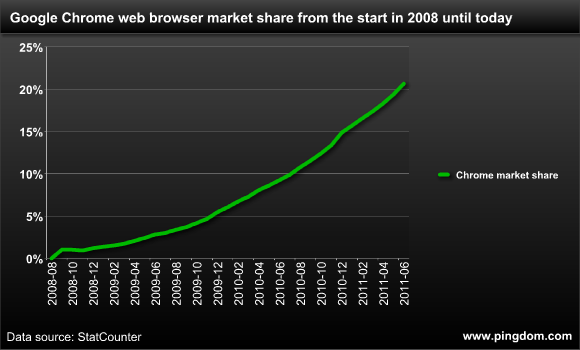 A number of the concerns you raise would seem to originate from software tending towards common ways of doing things. Browsers with large market share will have a proportionately large impact on the market and user perceptions, so forcing competitors to adapt if they are to encourage uptake. For 1 and 2, Firefox could have taken a different approach and allowed both the new and old key combinations, but for the old, added a popup reminder that there was a new key combination available and that the old approach would be deprecated.

While some changes (for example making the whole UI take up less vertical space) indeed look like they copy Chrome, it is a trend almost all browsers followed. However, it is in face changed user hardware, namely the growing predominance of widescreen displays and the consequent higher importance of vertical screen space, that induced this change - Chrome just was on the forefront of publishing those implementations in shipped browser software.

I think many of the things you listed follow a more general shift in preferences and user habits. As it happens, Google and the Chrome UI team are very actively shaping these, thus is appears as if other browsers imitate those changes. All in all, it's conventions that change. Personally I am rather greatful that instead of each browser retaining their decade old UX conventions it seems to be the case that those conventions established by one manufacturer or another converge more and more to general best practices.

For example, 10-15 years ago Firefox's tabs were considered on the forefront of development, because Internet Explorer still opened every link in a new window. Nowadays desktop browsers without tabs are practicly unthinkable.

Not the answer you're looking for? Browse other questions tagged browser changes chrome firefox or ask your own question.

10
Why do the popular browsers copy each other's user interfaces?
2
Unclosable last tab in firefox. Is this a real decision?

31
Why does Firefox remove the "close tab button" when you have more than n tabs open unless you focus on the tab?
2
Unclosable last tab in firefox. Is this a real decision?
7
Understanding the scroll bar in the Firefox 'List All Tabs' dropdown
4
How to tell to the user that a web app is optimized for a specific browser?
2
Can we build UX into old, large legacy systems?
16
Why can I only close tabs to the right?
0
Why does Firefox delay the download button?
3
How should Firefox 89 (Proton) fix its active tab indicator?