examples of user feedback for evaluation of other users' answers

As an academic project, I'm developing a simple facebook application. I intend it to be some kind of a mind game exploring creativity.

Its current design is simple: the user just writes a short phrase as creative as he/she can think of as an answer to a given question, then the question and the answer are evaluated by other users.

My problem is the evaluation interface. After some testing we realized people were confusing creativity with originality, so we decided to be more specific and show 2 tick selectors below the proposed question and answer to evaluate:

I have a clear idea of what I want but I have no clue on how should it look like from the interface point of view.

Can you give me some related examples you have encountered or implemented and liked that can help me decide which way to go?

Some ideas I thought of:

Should it be a button, a text link, an image changing on hover? which kind of image/s?

Should I have a third link/button/ticker to mark it as creative, which would automatically select the other two?

Should I also have a like button to mark when an answer is particularly interesting to the evaluator or is it already implied as it is?

(Of course the effectiveness of this method is in question, because the creative effort is almost as much on the person who thinks of the answer as on the persons evaluating that answer, but since there are many evaluators we are hoping to be able to determine with some certainty which users and answers are more creative, so we decided to leave that discussion behind and test it anyway.)

You can have an answer which is both creative and original or creative and intelligible or other permutations of the above. I would recommend a simple approach where people can just mark the answer as either of the three or a combination of the three depending upon they feel and the corresponding counters are updated per answer to give a total score. 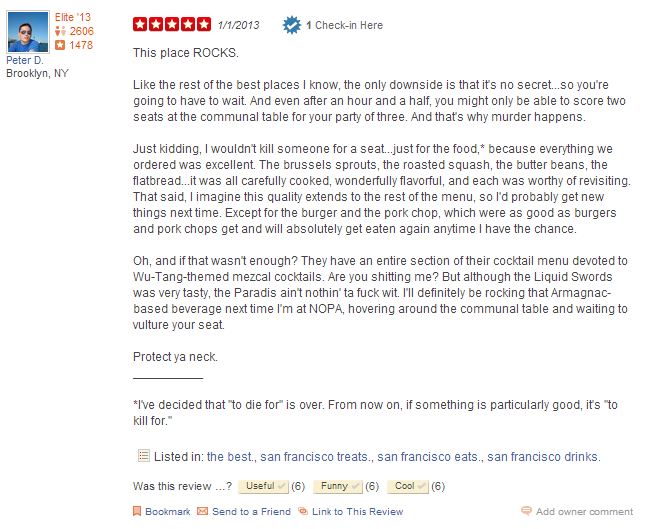 With regards to your question,

Should I also have a like button to mark when an answer is particularly interesting to the evaluator or is it already implied as it is?

I am not really sure what you mean here, are you asking for a way for the user to favorite a question. Then I would recommend using something like a favorite icon or you could take a leaf out of Yelp's book and bookmark it or even do it as stack exchange does

Not the answer you're looking for? Browse other questions tagged website-design web-app feedback web expert-review or ask your own question.

6
How should I present landscape-orientation page thumbnails in a series of portrait-orientation thumbnails?
3
Testing OK/Cancel buttons
4
Standardization vs uniqueness in web design
8
Disable or remove close button
1
is there a tried-and-true pattern for explaining required oauth permissions?
3
Minimalistic or fancy?
1
“No video device” feedback examples
25
Label & Text-box alignment. Read the case
1
How to explain to users that they can click