I'm working on a webapp that lets designers generate CSS through an intuitive interface. Right now I'm working on the Shadows panel and I can't decided which option has the most versatile usability. By "versatile" I mean the option that is easiest to learn as a beginner and quickest to use as a pro. It would be interesting to know in general if there are any studies on this kind of interaction (creating something new in a design tool) since it is hard to find any resources on the topic.

Option 1: The user is given several visual presets to create a shadow. After selecting one a dialog box with settings will appear. Each option will create a shadow with specific settings that the user can tweak. This option seems quicker because it takes one click to get closer to the type of shadow you want. This is Adobe's approach, but they use text instead of a preview image.

Option 2: The user is given two actions - add a shadow and add a preset. Clicking the + will create a basic shadow. This option seems more straightforward and simple, but also needs more clicks to get to the desired shadow. 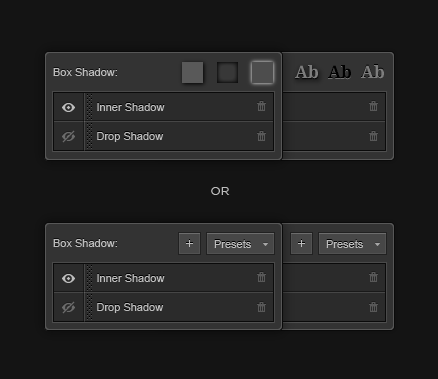 What seems most versatile?

By "versatile" I mean the option that is easiest to learn as a beginner and quickest to use as a pro.

The first option is easiest to learn and quickest to use. Assuming that a pro would only ever need to choose between the three styles in the first option, the solution is easy.

If a pro would likely need more options (and you want to offer these), then you are going to have to choose a tradeoff between usability and functionality.

I find the first much more obvious and intuitive to understand. I had no idea what the '+' button in the second would do without reading through the text. Such obviousness will often help the pro in speed as much as it will the beginner user - the good old 'Don't make me think concept'.

Not the answer you're looking for? Browse other questions tagged usability gui-design web-app user-behavior dropdown or ask your own question.

0
Intuitive way to present chained 1-N relationships
8
What is the best method to undo an action?
0
Menu selection state for presets with custom dialog
2
Dropdown execute action onChange
1
Design tips and best practices for visual navigation on mobile
0
Best way to organize process of adding child records to a parent record from a UX perspective
0
Negative Visual for a positive action
11
Minimum Maximum slider - Usability best practice
6
About Commanding in UWP apps. What commanding approach is best? office like?, UWP? or classic win32?
3
Dropdown that takes instant action on a web app - is this an accessibility or usability issue?