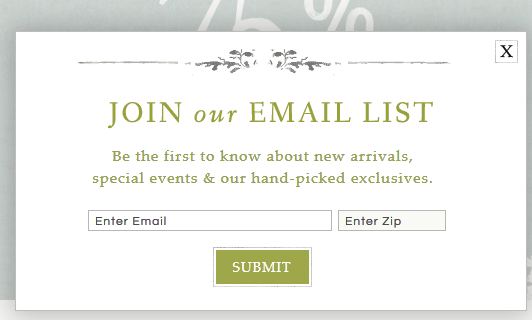 I am a little concerned about the effectiveness of this popup in terms of conversion and the potential for it being an annoyance. I did some research on what the general view is on mailing list popups and there seems to be consensus that they can help in increasing conversions but they can be really annoying as well. However most of this information was garnered by discussions in forums about such methods to sign up people. I am wondering if there is any research on whether such a popup is bad usability or there are pros which outweigh the cons?

Simply ask your client if they are willing to lose users at this step in hopes of collecting more email addresses. A complete and thorough visit of the site may be worth less to them than having that email address or vice versa.

I also like to tack calls-to-action like this at the end of good content (a gallery, a video) that I feel engaged users are likely to consume.

At the time they get presented with the popup their only experience with the site is the name, loading speed and an popup they did not open themselves.

If you want to comprehensively test and can afford to do so, set up google analytics, track newsletter subscriptions as a conversion goal. See how conversion, bounce rate and pages per visit behave with the popup in place for a day or week - my guess is you can effectively argue against keeping the popup with that data.

Old question but I find it increasingly relevant as the trend keeps growing. I can hardly visit a site without having modals interfering with my navigation.

The unsolicited and premature sign up/survey modal is now similar to the cookie consent message. It's so systematic that a lot of people don't even read it and they look directly for the close button. The difference is that it is even worse with newsletter subscription because those modals often intentionally block you from reading anything on the page.

One particular nasty practice is to make the cancel/close button as hard to find as possible by using faint colors, small icons or deliberately unexpected positioning. I usually leave those site immediately because it tells me the owners don't respect my freedom. It's like of a shop owner opening its till and locking the door behind you as soon as you enter. It's creepy and overly mercantile.

This trend is motivated by researches showing higher conversion rate with modals. But how many people are actually put off by it and bounce? How many want to unsubscribe after the first newsletter?

The technique reminds me of the pop-up ads in the late 90s. Website started overusing it and it became so annoying that users started to install plug-ins to block them then browsers integrated the functionality as an option and eventually blocked them by default. Now we see ad blockers and other types of extensions detecting subscribe overlays and I wish it could soon become a standard option in browsers to opt-out or at least standardise the notifications.

This is yet another sad example of a web design trend driven by marketing short-sightedness rather than usability. It is cyclical: it will disappear and re-emerge using new technologies. Whether it's bad usability or not doesn't matter, you'll have to design it anyway, but if you do making it less intrusive, less forceful, easier to close (e.g. scrolling threshold, escape key, big close button) and letting the user taste your content before first would help a lot.

Another thing is to avoid nagging the user, remember their answer and allow a long period before asking again. I have seen sites where the same modal appears on every article or each visit.

I would say do the due diligence and determine some "place" aka interaction of the site that suggests the user is "invested" in whatever the site is selling - then present them with the option to enlist in the spam roll.

@ your initial question : yes, landing on a homepage and being presented with this dialog is counter productive to your efforts. However, it is a very useful dialog, so as mentioned before - define the criteria that triggers this "pop up" and let the user stumble upon it as an easter egg.

I can't share any numbers publicly but I have first hand experience with two campaigns where this tactic yielded big results in an ecomm setting. Big results.

I hate the idea of it too. It makes me feel like a sleazy marketer. Unfortunately, the customers respond. I guess they like it in the end.

I make it a point to never respond to such pop ups and often leave the site. I'm not sure if this is because I know marketing too well. I'm beginning to wonder if it's a generational issue... will another generation turn against it?

In any case, you need to test it for every audience. Just because it worked for the last client doesn't mean it won't backfire with the next client's customers.

It doesn't necessarily be a bad idea guys! It just should be aligned with success of the user/reader.

Let's say somebody have already read three articles and spent 10 minutes on the page, he can actually be happy with signing up for the newsletter.

If done right - it can be really efficient way of getting e-mail database. There's nothing wrong with it.

Well, you ask about usability. I think of usability as the ease with which users can accomplish their tasks. So. What tasks are people coming to your site to perform? You know better than I do, but I bet few people are coming to your site in order to sign up for your newsletter. Therefore, your popup is an interruption, an obstacle between the user and their goal.

2
Are those "sign up now!" pop up windows taking away from the UX?
0
What are the arguments against modals when a page loads?

15
Are 'hints' or 'tips' popups a good idea?
7
Handling multiple "alert" popups ?
14
Do people like/hate popups, even if they're useful?
2
Multiple call-to-action popups while flash app loading
2
Usage of Popups
1
What to do about "occasional" recommendation in a decision support application
13
What's the purpose of the bottom bar in popups / modal windows?
3
Do fine-grained message statuses (such as when a message was seen) help usability?
1
Dropdown options that open popups
4
What are the most efficient user interactions needed on a community forum?