Lets say you want to customize and buy a new car online. You get to choose from a list of options for the interior. (Radio, Nav System, Leather or Cloth seats, powered windows, doors, locks, etc..) The car maker always preselects the cheapest options for you.

For the consumers, is it better to preselect the cheapest options, or leave the checkboxes unchecked and let the customers decide for themselves what they want.

In general, starting with the basic options selected by default and allowing the upgrades to be selected is a better option.

If you choose to check the cheapest option by default, you have a smoother checkout process as well as avoid the situation where someone feels that you are trying to rip them off by selecting a more expensive option by default.

The Apple or Dell store handle this very well, where the upgrade is shown with the additional price. 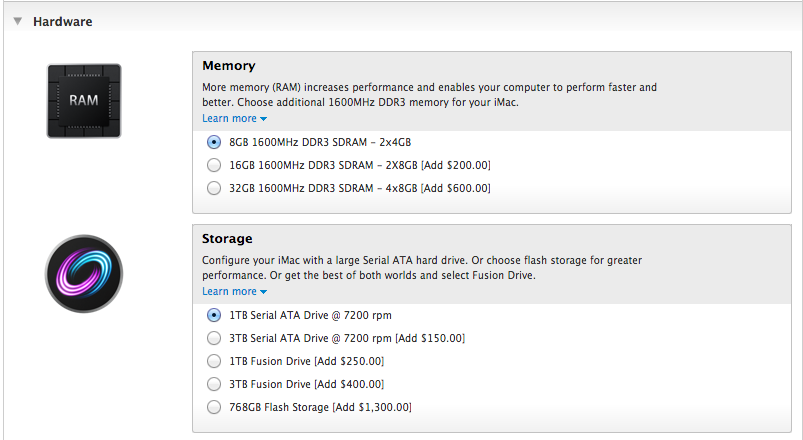 However this should only be done where there is really a base option rather than a common preference. It would be a poor choice to by default select the car colour as white even though that may be the cheapest option. But it would be fair to choose cloth seats by default over leather seats.

Consider each question on a case-by-case basis.

This isn't as cut and dried as it first appears. In some cases, the options will obviously have a "base" selection ('cheapest' for example), and that can be pre-selected with no issue. Making your users' life easier is your ultimate goal in all situations. But we also don't want to introduce unintended errors, or worse, have them leave because they have been offended by some cultural bias that wasn't considered.

Pre-selection is nice most of the time... but...

Consider, when there is no obvious starting choice, when all options are equally valid. What if they all cost the same, or are a choice between opinions? What if they are gender selections, and pre-selecting may be considered offensive to one or the other sex? In these cases, you run the risk of the user not making a conscious choice, and selecting something that wasn't intended... by default.

Also, in some case (such as on a survey or similar), there absolutely is no best answer. Pre-selecting a value (not to mention which one? "No opinion"?) runs the risk of skewing your results. Some users will not "take it serious" and just blow through with the defaults.

In reality, it isn't the form that should be one way or the other, but each question should be considered on its own merits and handled in the most appropriate way.

When it comes to buying expensive items, I would imagine most people to be very conscious of the overall price of the item. It would be in the retailer's best interest to convey to the client the "good price" they offer, while still outlining the various additional upgrades/options (with associated cost-implications). In short, don't pre-select expensive add-ons, unless the item is marketed as "everything (all add-ons) included".

Not the answer you're looking for? Browse other questions tagged forms usability user-behavior checkboxes radio-buttons or ask your own question.