I'm wondering what is considered "best practice" for displaying hierarchical lists that allow selection in a web app. In this case, we're presenting users with the option to select n counties per state. We've explored options such as a tree view: 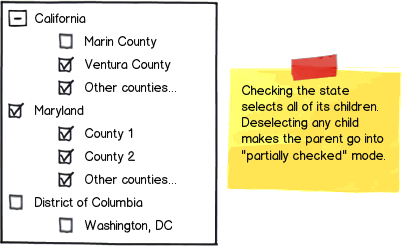 While the presentation is workable, there aren't any decent pre-rolled solutions that we've found available for this.

We're stumped. The tree view option raises concerns about complexity of implementation if there's not a pre-rolled solution we can use. The multi-list option is confusing to us as developers and so it would presumably be to users.

What, if any, best practices are there around this kind of situation? How might you display this hierarchical list of options?

Only people with much more information about the project can determine whether the extra cost of implementation to achieve greater usability will pay off. My initial reaction (and that of most people here I think) is "of course it will", but I don't know enough about the project.

Of the 2 models you describe model 1 looks clearly more usable. And it looks like it's a hierarchy with a depth of exactly 2, which makes it easier. Here's one alternative which suggests the hierarchy to those that might not be familiar with the indentation hierarchy indicator: 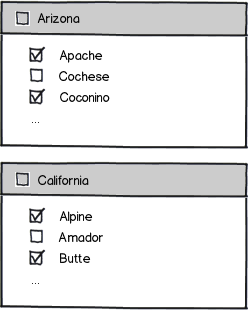 I think the behavior you describe of checking the state causing all counties to be checked, and the unchecking some counties causing the half-check (3 state checkbox) is probably good. It's not that conventional on the web but I think the meaning/behavior is easy enough for users to figure out. Here's more on 3 state checkboxes (or tri-state checkboxes):

Are tri-state checkboxes too complicated?

Tri-state checkbox: Which state should be selected after clicking?

I suggest usability testing on it (the 3-state checkbox behavior) if you can afford it.

22
Taxonomy Hierarchy Management UI Pattern
12
What's a good alternative to cascading checkboxes?
2
Best way to present a modal with two ways of searching?
2
Hierarchical display of categories when the user is not exploring
1
Enterprise scale Responsive Hierarchal Multiselect?
6
Auto-collapse subitems when using drag and drop for large hierarchical lists?
15
What is the best location for the "Add New Button"?
1
Display hierarchy of mutually exclusive options
0
Selecting single element from a long list with hirarchy