I'm trying to figure out possible layout options for a website project. Its function closely resembles EnglishCentral. This website helps people practice spoken English through a series of videos with subtitles.

A typical layout for this sort of design uses a left category navigation area, and thumbnail tiles. But in the initial stage of this particular project, I'm planning on using audio and text only, which means the no image thumbnails could be generated. I also prefer not to use the audio waveform as the thumbnail considering it's not a sound marketplace.

I'm wondering what other options do I have for the layout of this website? Particularly the thumbnail tiles part, how do I replace them with only text and audio? And how to make it attractive at the same time? Any existing examples?

I'd like to thank everyone who contributed ideas to my question. Originally, I was planning on not using graphic at all, and rely on texts. If typography were correct, it might look nice. However, in such a learning site, this scheme could be a bit too monotonous, and would be difficult to generate interest for users. So eventually, even though I don't have videos, I might use other form of graphics. A site like ThemeForest could've easily use screenshots as thumbnails, but they require designers to upload additional icons instead. So I'll think about using a combination of simple graphic, color-coding, and typography.

Firstly, you need to choose layout not on the basis of aesthetics, but usability. When websites use tiled layouts for videos it's not because they're attractive, but because there's no strong hierarchy in the results and the thumbnails provide the best representative of the video's contents. You haven't said much about the items being displayed or how users will choose between them, so I couldn't recommend a layout.

However, I can talk about making a website attractive without the use of images. Broadly speaking, there are four ways that almost any website can improve its aesthetics:

Now, after implementing these four steps, you may still not feel satisfied. But be careful - make sure you are not confusing 'being attractive' with 'having visual focus' or 'being appealing'. If your site still lacks visual focus, you can remedy that with proper typographical hierarchy and subtle hinting. If your site still doesn't feel appealing, try to expose more content and value. But don't just add visual elements for the sake of it, as that will just add noise.

You could use color and font size to distinguish links/headlines by topic and popularity to lightend up the overly rigid feel you get when just listing the links. Use headlines, font size and negative space to create a hierachy of how click-worthy different links are.

You could categorize the audio and text by type and associate a relatively-large icon with each type. Place a brief description next to the icon. That should help to give it a visual feel without needing video content. You could also let the color of the icons signify something, such as difficulty-level.

You could also divide the site into three columns (possibly based on difficulty level) so that you don't have text running all the way across the page. That way the text stays close to the icon it's associated with.

Here's a quick mockup of what I mean.

(The rectangles of color would actually be icons. The text would be headings and short descriptions linking to associated lessons.)

I would recommend going with a simple approach like Khan academy where you use distinctive icons along with text to highlight the the title and type of content.

The advantage of this method is that :

I have a similar use case where I have a faceted navigation UI with a result set displayed using the tiled technique. However the content does not lend itself to iconography or images, so my tiles are text only.

In place of graphic elements I am using meta data, text, color, and size to create a visual pattern that makes it easy for the user to evaluate all of the details of the search results. 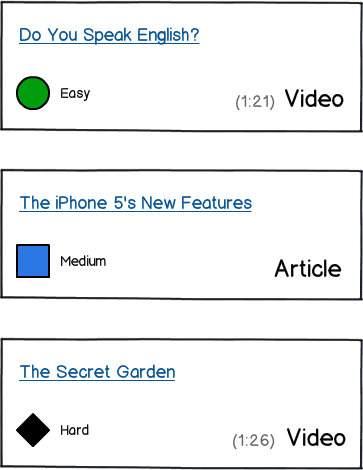 I used the EnglishCentral web site's content structure for the sake of the example.

Not the answer you're looking for? Browse other questions tagged website-design layout lists or ask your own question.

2
Examples of "Light table" GUIs for editing and comparing images, text or other data
5
How should I present landscape-orientation page thumbnails in a series of portrait-orientation thumbnails?
1
iPad splitview layout as a website layout?
4
Standard headshot and thumbnail dimensions and width/height ratio
2
Layout changing without user control
3
split screen layout pros and cons
0
Building a web site with hotlinks
0
Options for card layout on website
3
What's the point of responsive/adaptive design in doing UI?