placement of interaction elements on screen?

What is the best place for interaction elements?

Here's the situation: In our software there is an object (in this case a list with several items) that a user wants to work on. A user could perform several actions on this object (e.g. add new item, edit existing item, delete existing item). Our approach, in general, is to have all actions placed within an action panel (placed on the right side of the screen). This panel is always visible and shows all actions that are available within the current screen but also actions that navigate to a new screen (visually different from the 'within screen actions').

Which would be the best approach:

Which solution do you prefer and why?

Addendum: The action panel has the advantage that it answers the question: What can I do here? This is necessary, because within the application, there are many different entities that have different sets of actions. Some of these actions refer only to the entity that is at hand (on screen) and some actions take one entity as a starting point, then go to another area where this entity is used for a special task...

Users don't think in RESTful terms like this (Edit object, new object, delete object, etc.), developers do. So I'm not crazy about this interface in general. The better option would be to show the appropriate action on the "object" at just the right time in the workflow. But that's not your question :)

Here is how I would handle it. I would put the Edit, Delete and Add actions in the center panel. Each item in the list would have an Edit and Delete link and the table would have an Add button. When the user clicks Add, the user can either fill out a form (ideally displayed on the same page) or add a record to the table directly. 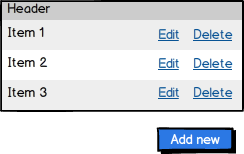 In option 1, they have to waste time by seeing options that are not related to the items whenever they want to manipulate an item, which results in slower scanning speeds.

In option 2, you are repeating yourself and forcing customers to scan options that they aren't interested in when they want to navigate away. Once again slower scanning.

Option 3 is clearer, as you are keeping the items your customers are using in the same section as the the actions that act on them. Navigation is also kept apart, so they can quickly scan that when they want to navigate away.

Personally I prefer 3rd one:

Also are you considering using tick boxes for multiple delete? What are the Group 1,2 and 3 buttons do?

Not the answer you're looking for? Browse other questions tagged gui-design user-behavior desktop-application placement dynamic-ui or ask your own question.

11
Button bar: criteria and position
5
Managing multiple windows in one application
4
Adding comment in a pop-up
8
Should an admin decide what users can do, or should he decide what not to do?
8
How to present a todo list / checklist to a user
0
How can I replace a clickable list in a GUI without annoying the user?
2
Selecting elements from a list box
3
Best UI/UX For Several Levels Deep Selection
2
Action button placement different for modals than base screens
1
Using distinct icon metaphors to support both create and add actions