How to enhance user profile information (add a user nickname) after the fact?

One of the websites I administer has had an active user registration and log in for a long time, which was mostly used to confirm users and send merchandise. So far, there has been no user to user interaction where the users' profile would have been exposed to other users. For this reason, users so far registered without a nickname and with only their contact information.

This site now gets an upgrade where users can comment on other users' generated content, thus requiring a nickname for at least those users, that upload content.

So far the implementation steps in consideration have been:

How or what other processes would you suggest in this scenario?

Should all users be prompted to register a nickname?

Should it be a concern that quick users might grab desired nicknames?

I'm willing to bet that you are more concerned with users not getting their desired nickname than the user will ever be. Right now, users have no reason to care what their nickname is on your site because it doesn't show up anywhere on your site.

Because of this, I recommend not pestering your users with any obtrusive process or notification (especially a one-off email) that takes them out of their way. The least obtrusive option is to assign a temporary nickname and allow them to change it when they make their first comment on the site.

Here is how I would handle it: 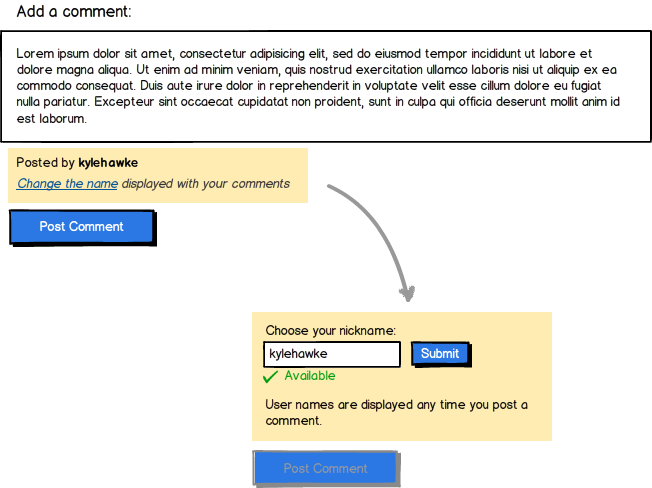 One of the simplest methods that I have seen for this is to assign every user a nickname based on their UserID. So one may be "user157" and another "user18" etc. Of course most people won't like these names, which is the incentive to get them to change them.

It would also help to send everyone an email letting them know that this is the case and that their nickname on the site will be "userxxx", but if they would like to have a better name and get a good nickname before they are all taken, that they can do it by following a link or by changing it in their profile.

Not the answer you're looking for? Browse other questions tagged registration profile community username or ask your own question.

4
How do I encourage users to fill their Profile
2
How important is it to show profile picture of a person in the header?
4
What's the best way to show multiple connected social media accounts in a user profile?
0
User profile design for mobile appliation
1
How to handle many data related to the user(profile)?
5
Why should a user complete a user profile?
1
multiple 'profile pics' per user?
1
How to handle blank state on profile pages?
3
The Profile Page at Work?