I'm trying to figure out how to conduct a usability test upon a handset device (smartphone).

it seems there aren't many methods for screen video capturing of a user making use of an app.

Do you know of such methods? or alternatively how to conduct such usability test?

UXD Researcher Laura Bowden recently gave a presentation at my school about this exact topic in which she suggested several methods.

Some general principles for mobile usability testing she gave were:

If you want to be able to record what users do on the screen, there are mobile camera mounts for usability testing. 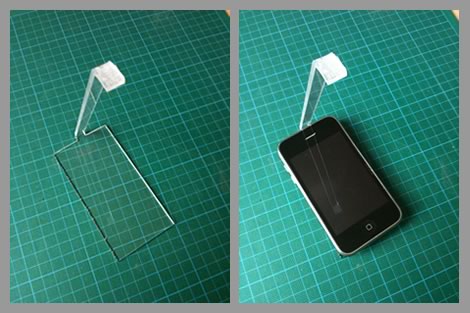 There are apps (such as RecordDisplay for iPad and iPhone) that let you record the device screen to a videofile, which isn't quite as good at recording the user's every motion, but at least gives you a record of what pages they went to on your site and how quickly.

If you're willing to jailbreak the phone, Cydia has applications that allow you to log the user's taps or swipes.

If none of the other options work for you, you could try using an online mobile-device simulator on a desktop computer, such as the iPhone4 Simulator.

The key thing to remember about mobile devices is that people use them on-the-go, often in particular favorite settings. The most effective testing methods will thus travel with the user to their preferred location, where there may be a lot of noise causing a reduction in attention span.

Get a Huawei Mate 8 phone.

This has a bizarre input shortcut: double knuckle -- double tap, to start video recording, and shows all touches within the recorded video.

I am not kidding. Double tap the screen with two knuckles, instant video screen recording. Quite powerful device, 1920x1080 resolution recorded at 720p. Battery is very strong so you can do this all day with dozens of people. It records the audio, too, so the user can comment as they're experiencing your app and you'll get that, too.

I know this sounds like an endorsement. It's not. It's just the best tool I've ever had for recording interactions quickly and easily, with anyone, anywhere, with any app, and seeing their input and cogitation/digestion time and touches.

It is an Android device, so all other caveats apply.

I think there are two really good options:

Not the answer you're looking for? Browse other questions tagged mobile usability-testing tools or ask your own question.

1
Recording Mobile Device for Usability Testing Sessions
1
What is the best way to record a user lab that includes multiple devices?
7
Usability testing using GoPro?
2
How do you conduct remote usability tests on mobile for your web app?

7
How to recruit participants for usability study of a mobile app?
2
Modify / merge standardized usability questionnaires?
5
Can I test different devices when I'll only have a sample of around 10 participants?
5
How to allow for 'exploration' in your user testing?
1
Usability testing
1
Help and advice on user testing for accessibility?
0
Testing variables for video autoplay
0
Contextual Observation & Best UX methods to adopt - Practical approach
1
Usability Test - Boomerang Technique going wrong