I'm currently struggling with the design of the new user interface for a rather large application. The current version of the software consists of ~150 forms, and they are neither pretty nor intuitive, hence the redesign.

In the new design, I want to keep things consistent, i.e. I want those forms to look and feel as similar as possible. But in some cases, it just doesn't feel right. For example, the layout that makes sense for the management of a master data table with many fields and several detail tables seems totaly bloated for a smaller table without detail tables. On the other hand, the most straight-forward simple design approach for the small table is IMO too inconsistent with the layout of the part that managers the larger table.

How to attack the problem? Stick to one layout? Mitigate the consistency claim? Look for a better one-size-fits-all approach?

A couple of thoughts come to mind:

You are correct that consistency isn’t everything, and you should weigh its benefits against other considerations such as the efficiency of each form. I’ve details for estimating and mitigating the severity of inconsistencies for making such trade-offs at Achieving and Balancing Consistency in User Interface Design. I discuss flexibility at Expecting the Unexpected.

IMO you need to clarify (for us, or maybe for yourself) what needs to be consistent, and what not.

Consistent behavior means: Things that look the same should behave the same.
Adequate appearance means: the look helps the user predict the functionality.

With these ad-hoc definitions by humble me, they are not antagonists.

I've seen many attempts at consistent appearance for things that are functionally different. Now, with some age, I consider that a mistake in many cases - at least, when the similar looks were motivated by similar or shared implementation.

IMHO, striving for a similar look between 150 forms (OMG!) isn't even a good goal. How are your users to tell what they are just doing? 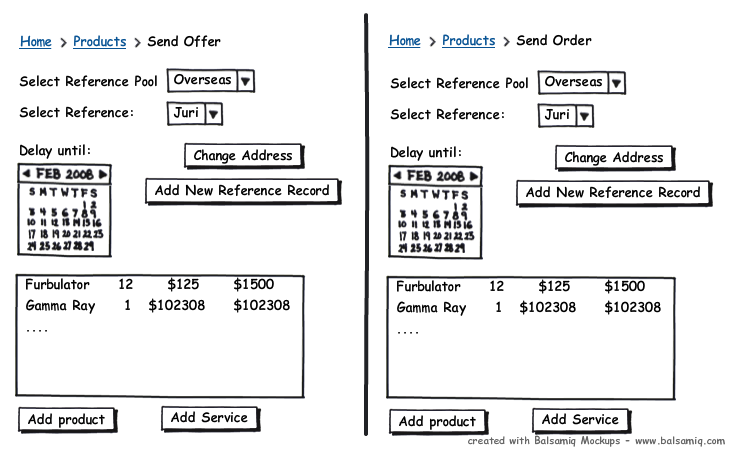 Can you spot the difference? Very consistent, but a recipe for disaster.

In this example, details like selecting the receiver, selecting products and amounts etc. should behave the same - that's consistency. Appearance, OTOH should be significantly different.

Developer preferences: A "one size fits all" approach goes down easier with developers. Instead of implementing 150 forms, they implement a form generation engine that mostly configures itself from database meta data. (We just like to solve meta problems, and hate repetetive work. This even is the more efficient approach if the result is what the user needs.)

User perception: Replacing an existing UX is different from introducing a new one. For non-technical users, the Forms are the application - they don't know business logic and backends, they just know lists and fields and buttons.
This means if you change the UI completely, you may see a lot of friction when the solution is rolled out, simply because the users see a unfamiliar application, while IT thinks it's the same data, so only little training is required.
Which takes me to the part of my reply that I loathe to say: Be careful with what you throw out. An efficient and elegant UI may be much more error prone than a ugly but familiar one.

[edit] As Michael Zuschlag points out, don't worry to much just be prepared for the rollout.

Keep the flow of groups of elements Consistent.

In addition to the visible elements, another thing to make consistent is data flow and tab order when a user is actively adding information to the form. A rule to follow would be to Consistently follow the same flow order for data groups such as address (made up of things like street, city, postal code, country, etc), name (salutation, first, middle, last), or product entry (name, brief description, long description, colour, weight, number of doodads included, etc).

Expert users, especially those who touch-type, will start using the tab button to improve their efficiency quickly. Major breaks in tab flow, or forcing the user to move a mouse and manually click (gasp!) to change focus will drive frequent users of the system batty.

Also, you may not be implementing these for the web, but the basic idea still holds: Grouping Form Elements or Explicitly Setting Tab Order has the added advantage of being more accessible.

what do you think what do users think about your changes? Have you done some user's issue investigations? I think, you have at least two parallel works: