I am currently considering a page structure that would include a video.

The context of the page is it is a kind of landing page meant to provide access to informational and educational materials about the function and value of the non-profit.

My concern is that the video's image coupled with a placement in the right-column would trigger the banner blindness effect even though there are no ads anywhere on the site.

Does the "banner blindness" effect still occur on sites with ZERO advertising? 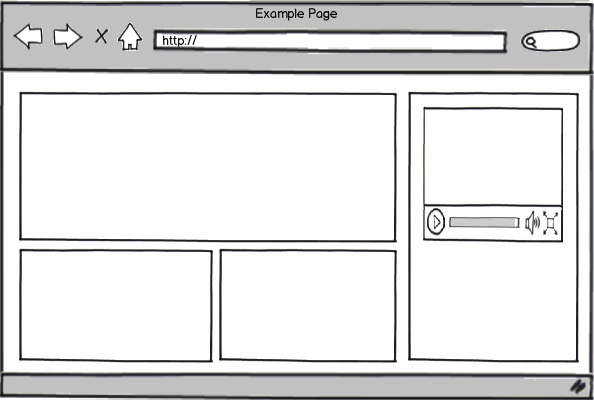 If the user finds good content in the right column on your particular site that is obviously not an ad, will they adapt and remember the "reward" they found there last time?

Or will the banner blindness effect be too strong?

Simply said: yes, it's possible. I was involved in an eye tracking study several years ago in which people had significant difficulties finding a link they needed to complete one of the tasks. The site had no advertisement and the users knew it but they still avoided looking at shiny moving things and searched for a long time in traditional navigation and text content before looking elsewhere or giving up.

Beyond that, I don't think it's worth speculating too much on what repeat visitors might “remember” or not, the only way to find out would be to test it but you have to remember that no matter how much you wish it to be different, your site is still going to be one of many sites people will see in a given day. You know your audience better than us but it's difficult to imagine that many people would visit the site from a non-profit organization very frequently and if they do, they would typically be looking for practical information or perhaps news and other fresh content and not want to constantly watch a presentation video.

There are also other concerns with video as a way to present information on the web, you might want to consider if that's really useful on a landing page.

As Gaël Laurans said, the essential answer is of course to test.

But if I would have to guess, than I wouldn't think the proposed design would cause the video to go unnoticed. This is because it doesn't look like an ad.

Ads, from my experience with the web, are strips of richly colored animations, usually taking a narrow margin on the side of the content. I'm sorry I can't supply with a more accurate visual definition of what makes an element look like an ad.

Never-the-less, I believe the video, in the layout you proposed, would not be perceived as an ad for the reason it won't be a narrow banner, but squared. More over, it's not on the margin of the content, but a serious part of the width of the page, thus giving the needed respect a content is due. With other tips you've been given here on how to differentiate the video from looking like a banner, I think you can zero the chance people would mistake the video for an ad, and ignore it.

Note that the categorization between ads and content is mostly unconscious, so as long as it doesn't resemble the banner from a glance, it would pass the automatic filter in people's minds, and they would pay attention.

If the video would start playing the moment the page is loaded, there is a strong chance it will be notices, however, I find this practice intrusive and repelling.

Banner blindness is relevant to things that look like ads, regardless of whether they actually are ads or not. I think in your case, banner blindness probably would not be a major issue; I think what's more important here is content priority. Side-columns are usually reserved for navigation to related content, rather than as a place for content itself. If the video is important, it may be better to put it in the main content area of your page. This would also allow a larger viewing area for the video, and it would be more clear that it is content relevant to your site (and thus not an ad). If the video is of secondary importance to other content, you might be better off with a link to the video on a secondary page.

Not the answer you're looking for? Browse other questions tagged website-design layout user-behavior user-research or ask your own question.

1
Web comic site with three languages?
5
How do interstitial ads impact site UX?
3
What impacts the user's visual flow on geometrically non-traditional web layouts?
2
How to make fluid web site consistent
1
What is the correct currency formatting with zero amounts?
1
Show Education/Government/Non-Profit pricing with normal prices?
0
Building a web site with hotlinks
0
How to design a website with zero user data?