Does anyone have examples or suggestions of iPad/tablet interfaces that present more than a couple of levels of content? I'm struggling with how to properly present this information without either 2 back buttons being visible or some other UI clunkiness. Here's a rough structure of the data in SECTION B:

So my assumption was I could use tabs to silo the high level sections, then use a right-side listview for the subsections similar to how the Facebook iPad app shows your friends on the right. Are there pitfalls I'm missing with this? Has anyone come across a different approach? Any help is greatly appreciated. 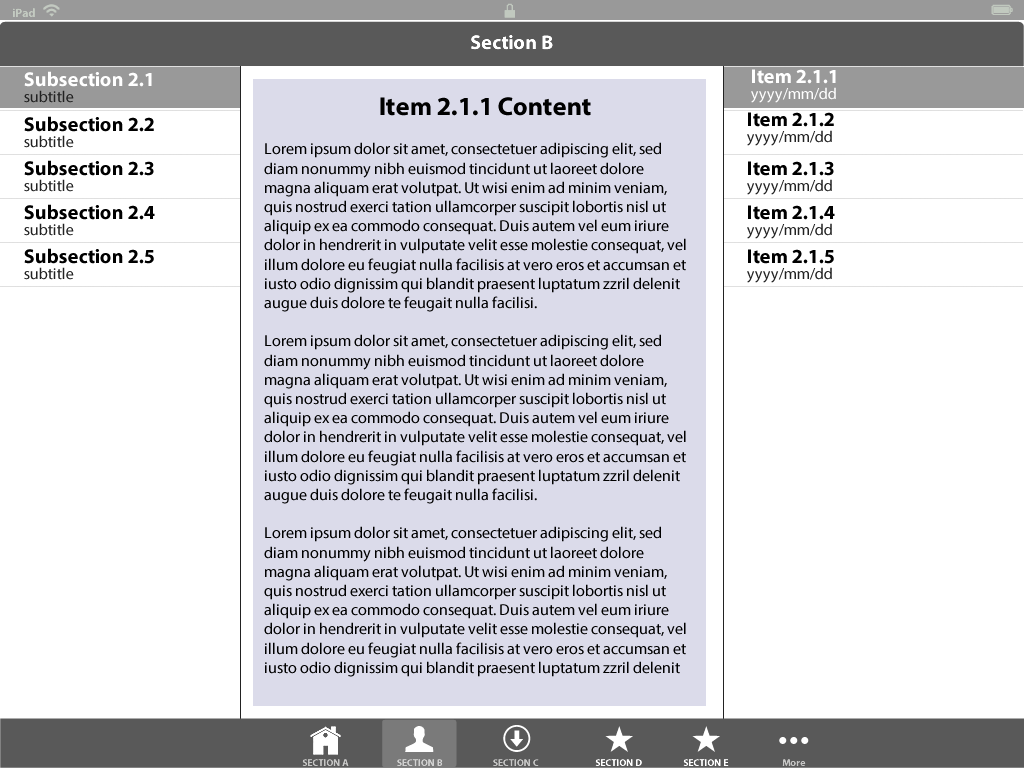 I think separating the 2 lists like that muddies the fact that they represent a hierarchy. That separation is unconventional and counterintuitive.

One possibility is to simply show the hierarchy (as you have at the top of your post) on the left. An optional feature would be to enable hiding/showing nodes of the hierarchy like some file browsers allow directories to be expanded/collapsed.

Any approach that uses 2 columns for the hierarchy is taking up valuable width, which might not be an issue in landscape orientation but might be in portrait.

I would suggest that you test this as a prototype to understand if the audience actually comprehend that the third level content exists. From case studies and discussions I've seen it's quite common particularly on tablet devices for hierarchical, tree based navigation such as this to be lost via the interface as the touch interaction model is quite different.

Not the answer you're looking for? Browse other questions tagged navigation layout ipad tablet or ask your own question.

15
Designing for the iPad
15
iPad/iPhone alternative for hover states
3
iPad simulation for websites
1
Can I use a single layout for both an iPad App and a Web App?
0
Do we really need a "Sign Out" option for iPad native app?
3
Swipe direction for read document on iPad
2
Modal view for iPad in iOS 7
0
Menu with a lot of menu items for iPad
2
Best practice for multi-level menu in iOS / iPad