Why does MediaWiki put little padlocks on HTTPS links?

Does anyone know why MediaWiki puts little padlock icons next to HTTPS links? For example, if I put this link in a wiki article: https://twitter.com/harry_wood it would get a little yellow padlock by it.

Here is an example actually on the site: 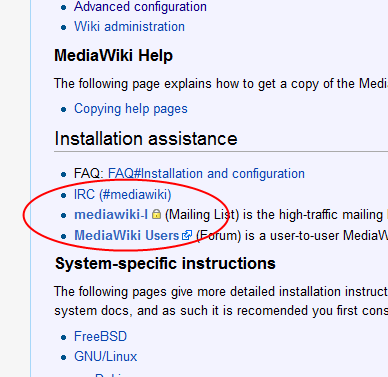 I'm sure the answer is "security" but why? What's this actually guarding against? HTTPS used to be a rare thing, but more and more websites these days are switching to be entirely HTTPS (e.g. Twitter), so we're starting to see a lot of padlocks.

It doesn't seem like a particularly significant thing that the user must be aware of when clicking the link. I know there's a security thing around unexpectedly leaving a secure website, but... Would I be right in suggesting that this padlock decoration is a bit unnecessary these days?

From a historical viewpoint, I suspect the reason is simply "because someone thought it would be a good idea".

In fact, I did a little bit of digging. The padlock icon for HTTPS links was first introduced to MediaWiki in 2004 as part of the then-new MonoBook skin by Gabriel Wicke. Specifically, it first appears (along with a generic link icon and special icons for FTP, mailto and IRC links) in this commit from March 23, 2004; with the CSS referencing them introduce in another commit made earlier the same day.

As the comments in the CSS file indicate, the original MonoBook skin was heavily based on Plone 2.0. This includes the link icons, which were simply copied from Plone. Digging further back in Plone's codebase finally turned up this commit from 2003 by Alex Limi, which adds a CSS rule to show a padlock icon for HTTPS links to Plone; the commit message simply says:

"Added HTTPS links for the links script. They're so darn cute! :D"

(The padlock icon itself was introduced into Plone earlier, somewhere between 1.0 and 1.0.5, but appears to have originally served a different purpose; specifically, it first appears in this commit, which is described as "added lock icon to content that is locked via WEBDAV".)

By the way, you're apparently not the first to find the yellow padlock icon too obtrusive. The issue was discussed on Wikipedia back in 2009, and as a result the padlock was changed to a blue version that looks more like the ordinary link icon. Alas, the change was made after the new Vector skin was forked from MonoBook, but before it was made the default, and apparently no-one ever got around to recoloring Vector's slightly different padlock icon in a similar way.

Not the answer you're looking for? Browse other questions tagged design hyperlinks security collaboration or ask your own question.

10
Usability and security for user access and password handling in a web application?
4
Why does ux.stackexchange.com use a darker colour to indicate visited links?
8
Why does stackexchange not underline hyperlinks?
29
Why do read links turn purple?
5
Undisclosed mailto: links. Why is this still prevalent?
10
Implementing a passphrase instead of a password
13
How should one differentiate links?
3
How to put multiple links in one text