I am working on a web app where users tell their favourite movies. Since there are too many movies to pick from I am not able to provide a select box. The jquery autocomplete works nicely but I wanted to make it more fancier.

What are the user friendly ways to let users pick one (or multiple) options out of many many possible. In my case, there is a very big set of movies, so how do I let users pick some movies out of the whole set?

It's a question wether you want people to recall or recongnize movies.

If you want them to recall, there's no reason to show anything fancy, an empty searchbox will do.

If you want them to recognize, you should list some movies first.

Use a kind of autocomplete which is used in e-mail sending, facebook message sending and tagging (like, at this question). It's called multiple value autocomplete, "facebook-like autocomplete" and so on. Use the image of the movie (DVD cover or such) as an avatar.

Bear in mind, that a portion of users aren't likely to have a decisive answer to that. Some people have no decisive answer to such question, and say "that's one of my favourite film too!" when it enters the conversation, or when they've seen it recently.

Sort the list by release year. Ask them when were they born and start the list around when they were about 10-12 years old, and show about 10 years. I think that films which we have seen at a more younger age have more lasting impression on us than the films we see later, but this hypotheses needs to be tested.

Of course, you can meet a film which makes a great impression on you years after that, and nothing prevents you to see films which were made long ago and still have a big impression on you - how many Star Wars fans were born after 1977?

Second what @Aadaam said about recognition and recall.

And to expand on that, this is an excellent opportunity to engage the user and use some seductive interactions to make things a little more sexy. The user will have fun, and at the same time, you satisfy your business goals.

Consider using images, similar to what GetGlue has done: 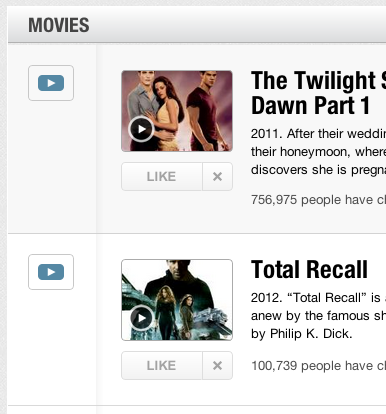 When the user clicks on "Like", the button changes to a selected state. You may also "cross" it out to get rid of the movie (therefore giving you more information to work with). I would create a grid of 9-12 movies and allow the user to page through the database, but provide an easily accessible exit mechanism: 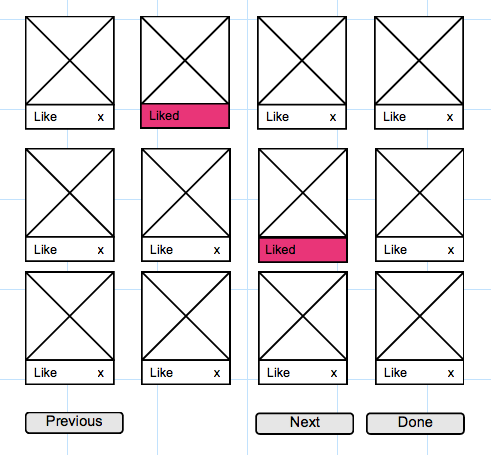 Perhaps with auto-complete at the top: 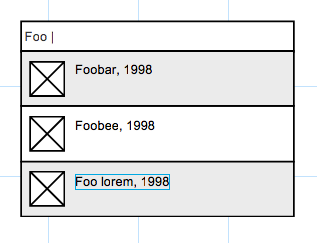 Is there a reason why you're only concerned with 3-6 selections? If not, upon dismissing, this interaction might maintain as a cycling module on the site. The more information you get, the more sophisticated you can build the user's preference graph for smarter recommendations, etc.

Not the answer you're looking for? Browse other questions tagged website-design gui-design web-app or ask your own question.

2
Multiple, hierarchical selections for web application
4
Best way to let user select one of 100 values?
22
Most intuitive multi-select component for the web
1
Proper web UI elements to select interval between snapshots?
3
Dead-simple way to let a user select multiple time ranges
1
Allow numeric input or have user pick from dropdown?
2
Is this clear enough for the user?
2
When is it ok to change an entire control on a user?
0
Pick one date/time over multiple days
1
Allowing users to select large items to export from a paginated list