How to represent a one time action

I am doing serious games and simulations and I sometimes have the need to represent actions to the user that they can only do once. Basically the user issues a command that only needs to be done once. This is something that does not really have a corresponding standard gui element. The problems are

I have tried various elements but none are really ideal so I am happy to hear about any input from this community. Have you had a similar problem, how did you solve it ?

The easy ones are using buttons or checkboxes that get deactivated after being used. These work but the fact that they only work once has to be communicated verbally.

I appreciate all the comments and this is helping a lot, thanks. I see some very game oriented solutions come up and while I personally would like to be able to do something like that and use lots of contextual icons. We can't do that due to cost and personnel. Our simulation/game interfaces are very text driven the pandemic response simulator is one example of that. In that project I used something similar to evalica's suggestion.

Let's compare this to an "Install" action:

These steps can be generalized for any action, by using buttons and labels to represent actions and statuses.

I would opt for the simplest possible solution: just display the number "1", e.g.:

After a couple of times (helped perhaps by a hint in your app), users will get the idea quickly. A benefit of this approach is that you don't have to get too creative with icon designs -- simply use your existing icon set and add "1" where applicable.

In Apple's case, the meaning is different: when "1" is displayed, it means "repeat song" instead of "repeat library or playlist", but there is no reason why you can't use a similar approach to indicate "can do action only once".

Update: On further thought, the icon with the "1" in a circle can be confused with a notification badge, as is commonly used on the iPhone, Mac OS, and probably others. A better representation might look like this:

Since you are saying that your application looks more game-like, you can take a look at some social games, which are using a lot of one time actions. For example for the various tasks in the games (i.e.. build a farm), they display an icon that represents the task. Clicking on it pop ups what needs to be done for this task, and after completion it removes the icon. This way the user know the task has been done (the icon is gone), and can not be done again (cannot click on the icon). Note: you need to show the user that this task is gone, since that is one of your requirements. (in the game: you can see your newly build farm). 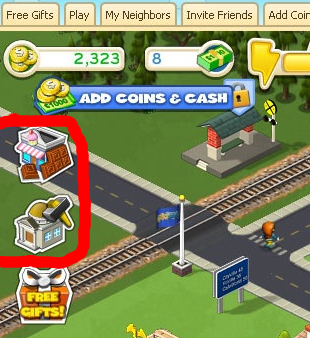 Another way is represent a list of tasks that needs to be done, and remove those tasks on completion. The same as described above, but perhaps this way of displaying it is more suitable for your application.

Could you give examples?

I can think of a very few - e.g. semi-automated import of old data after an update.

However I find it hard to conceive that real one-time operatons have a good place in a general UI - i.e. button field or toolbars. But that might depend on the operation.

Nonetheless: one option could be putting these operations into a "List of pending tasks" (or "things to do"). This can be accessible through typical "notification list" cues, e.g. a (!) icon in the status area.

Placeholder - Many games use a placeholder and a final object (like an empty picture frame before, and a picture afterwards).

I would aso keep the button in place but change the reprsentaiton if the user wants to interact with or inspect the one-time-action-result.

Unlock UI - If the item unlocks certain functionality (like a calendar to schedule advertisements), make the unlock operation a popup when the user tries to access that UI, e.g.

A simple change of representaiton would be an overlay, such as a plus before, and a checkmark after.

If the Operation doesn't affect a single aspect of the user interface, you can sue a queue of operations, that oculd be simple a segment of a toolbar dedicated to these operations, where options the user selected are removed, and actions that become available are added.

Skill Tree
If the one-time actions are interdependent, a skill tree is a common UI

Not the answer you're looking for? Browse other questions tagged design-patterns interaction-design controls or ask your own question.

2
Best way to communicate the action of a non-button control
5
How to visualize similarity of one file to another?
3
How prominent should the deactivate account function be?
2
Proper control to select a fixed (text) value or numerical value
30
What is the terminology for tricking the user into thinking they've almost won big?
4
Intuitive All On/Off GUI?
0
Pattern for a one-time action
2
How should users be notified of license expiration and of renewal?
0
Is a series of GO buttons, at each step of iphone user interaction, easier for user to understand than different title each button?
4
Button without direct action