I'm a mac user, and every so often I see this:

Which is great and all, but it often interrupts my workflow as the notification appears above all open windows and only disappears when selecting one of the two options - both of which take you through to the app store.

This is obviously Apple's bid to force users into updating their software, but my interpretation of it is that it's a broken UX on the Operating System.

What might be a better way to notify users of a software update, without interrupting workflow?

I think the update notification should sit in the system tray but it shouldn't be just another icon that gets ignored with the rest of the lot all cramped in there.

So I would add a notification "button" if you will, to the system tray as follows (colors can differ based on what you like but it should be contrasting enough to get noticed). 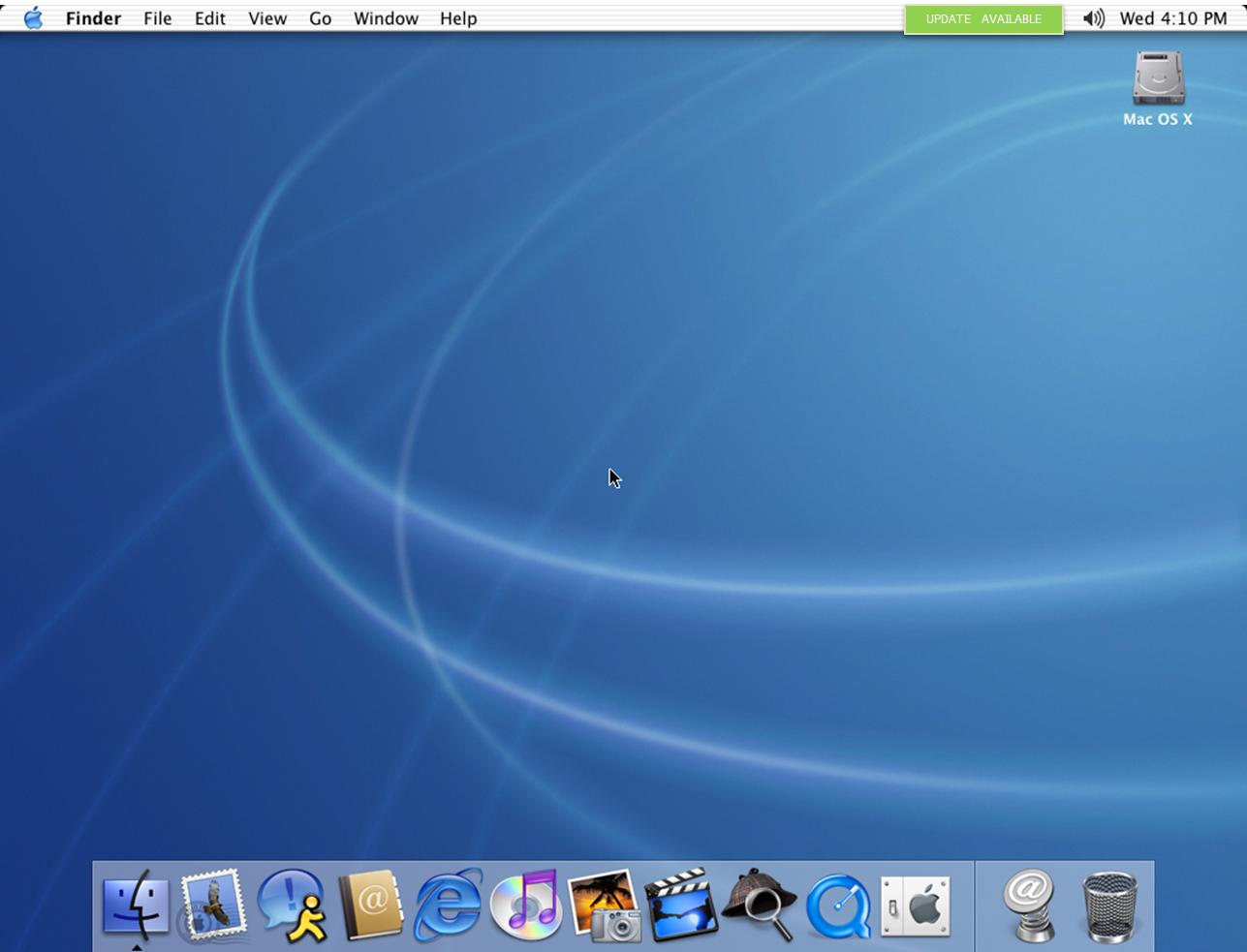 And when the user clicks on it, it can show the details as shown in the screenshot in the question. As you can see from the picture below, the user should also have the ability to close the dialog (red cross on the top left corner) so that they can visit this later.

But the update notification in the tray will still remain until the user acts on it. 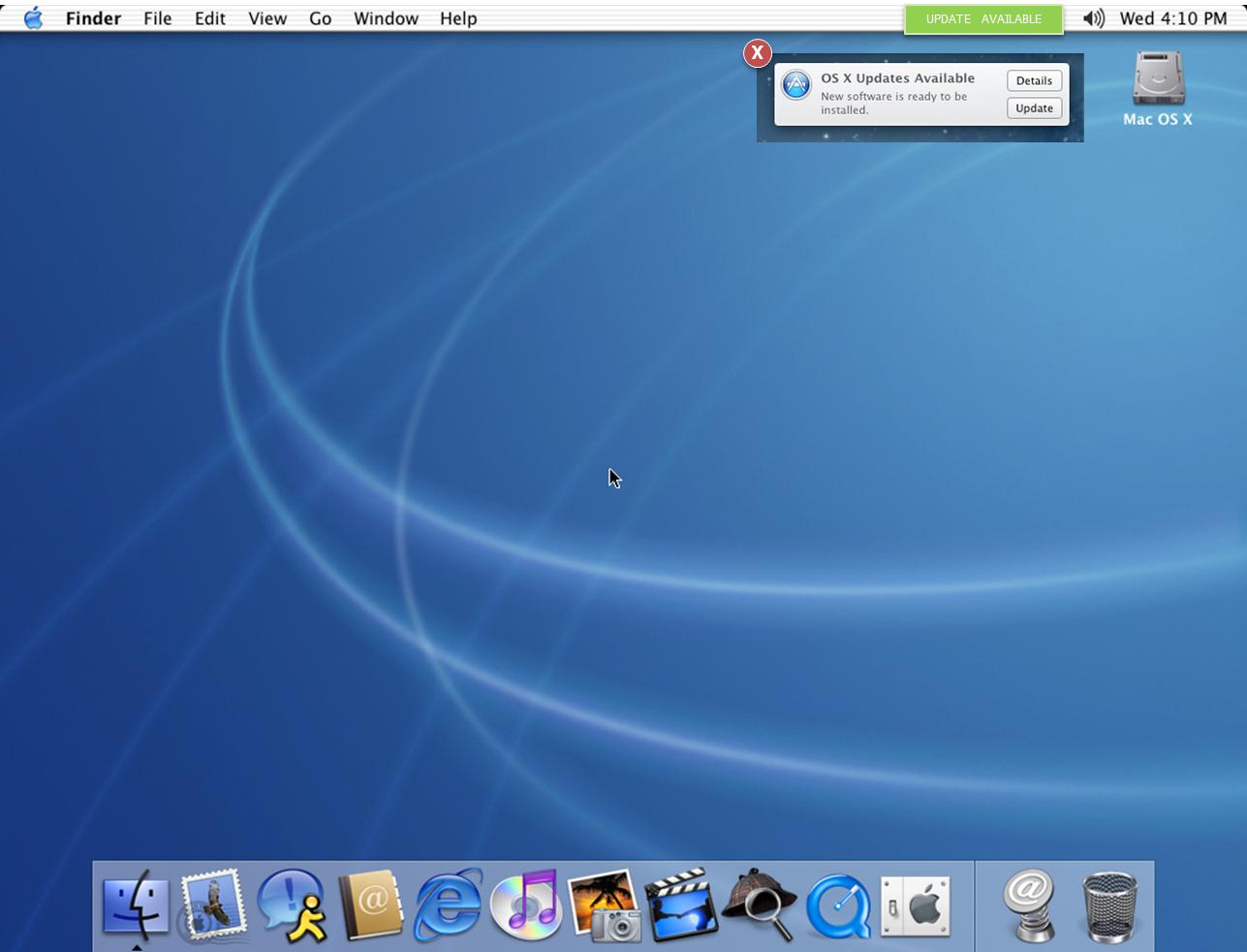 By doing this, Apple can get some comfort knowing that the user will always be aware of the software update since that won't go away from the tray until the user installs it. But at the same time, it is unobtrusive enough to not force the user to do something about the update right then and there.

Chrome does this pretty well; it quietly shows a little up arrow icon over the "menu" icon (oddly I couldn't find an image of this). When you click the "update" icon it lets you know you should restart Chrome to let it update. If you naturally close Chrome at any point it will (very quietly and quickly) update.

Since updates generally aren't so important that they need to be imminently installed this seems like a perfectly acceptable solution; the one problem with this is that, as Chrome has implemented it, there's no "opt out". As long as you do your updates rate, that's not necessarily a bad thing however. Adapting Chrome's method to something that prompts every time (but why) would take some work, since you can't easily just show a pop up when restarting/shutting down the computer (I often do this immediately before leaving my desk, I'd never see this pop up in many cases). A pop up that shows after the computer restarts would surely be seen, but it still has the problem of interrupting workflow; suddenly instead of doing whatever I turned my computer on to do I have to respond to this pop up.

Steam almost has a good auto-updating system along the same lines as Chrome, but unlike Chrome, Steam makes you watch it slowly download and apply the update; keeping it a background process like Chrome does eliminates much of the pain.

There are some who say updates shouldn't be made because of things like users who never want updates or extremely poor internet connections, but I really don't consider it worth it to address those issues with drastic changes. You should never address edge cases by harming the experience of the vast majority of your users who just...don't care. Chrome updates get relatively little grief compared to Adobe, Java Etc. If you need to keep up to date, do it! Quietly.

iOS implemented notification pretty well I think by placing a badge on the app store icon. It is not intrusive but is also easily visible. Showing users an update notification when the user actually opens an app is another reasonable option as long as there is "Don't show it again" option. In this case user's activities are not as interrupted because notification is more relevant to user's task. Current mac's implementation could perhaps benefit from showing more details about which app update is available up front. Currently, it says "software updates available"; the doesn't provide user sufficient information to decide whether to click it or not. Of course, space could be limitation here; if there are 20 updates it is hard to include all of the details but if there are 1-3 it could be feasible.

Perhaps a better implementation might be to offer the user a timeout period? After all, users are already familiar with this type of feature; "Don't show me again" or "Remind me later", for instance.

Above is a quick mock up of how this problem might be tackled. It allows the users to quickly remove the notification so as not to interrupt their workflow, whilst also allowing the OS to prompt the user until they do update. Which they will, as this will become annoying.

14
Is the concept of versions out of date?

14
Is the concept of versions out of date?
6
Do users always update Flash?
7
How long should a software update be postponed when the user says "later"?
0
notify user of not being able to update array