Data visualization - what should be the baseline, 'you' or the 'comparator' series?

This question is about data visualization, but ultimately it deals with usability and user expectations, so I felt it was appropriate to post it here.

Imagine you are doing a comparison over time between two entities, one entity (or series) represents 'you' and another time series that represents some benchmark entity. The user's analysis question is to try and get a clear picture of how 'you' compares to the benchmark entity over time. In other words, the delta between the two series over time. To do this I opted to flatten one of the series (turn it into a baseline) and make the y-axis show 'delta from baseline'. My question is, which of the two series should be the baseline?

Here is a concrete example:

Here is the basic visual (two series, with the difference highlighted in blue): 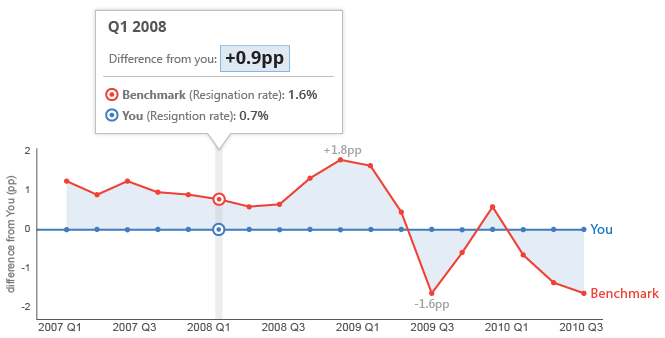 Definitely Option B, because users want to see how they are doing relative to some constant. It's a self thing.

The variance of the line for 'You' is better perceived and interpreted as being related to you doing the activity, rather than you being the constant and the world fluctuating about you.

It's like asking whether you are (stuck at) the center of the universe and everything revolves around you, or whether the center is elsewhere and you (perceive yourself to) have the control to move around.

It doesn't matter if the baseline is a comparator to reach or to avoid, it's still a relative sense of self.

Not the answer you're looking for? Browse other questions tagged info-visualisation comparison or ask your own question.