How to word UIAlertView YES/NO or Continue/Cancel questions on iPhone?

I'm implementing an option in one of my iPhone apps that would put one of my existing controllers into a new mode of operation. Instead of tapping on icons to add events within the app, the controller would now edit the icons themselves, so the user can change their border colors and titles.

This is an optional feature that I would like to explain to the user. I plan on doing the following:

I'm thinking of how I can word this dialog to make it clearer to the user that the app is still in edit mode and am wandering what should I do with the button titles of the alert dialog. I'm struggling with:

I can ask a question in the form of "Would you like to stop editing now?" and have YES/NO answers

Which approach is more user friendly and is better/quicker understood by iPhone users?

What should the title say for a dialog like this one?

Thank you for your input! 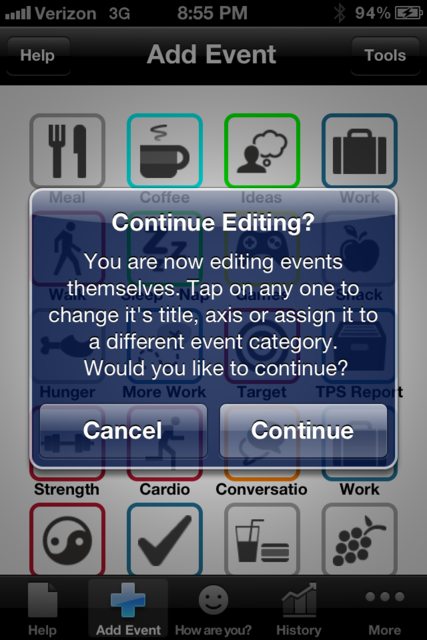 Usually, when you want to warn somebody or ask them a question for verification or confirmation in real life, it follows the pattern of a statement followed by a question. For example, "So you've ordered 2 grilled chicken sandwiches, medium fries, and 2 small drinks. Will that be all?".

Another example is that of an ATM. For example, "Using this ATM will cause you to incur a service fee of $3.00. Continue?" And the options usually are "OK" and "Cancel".

Applying the same logic here, what if you change the title to a statement instead of a question? For example, instead of "Continue Editing?", you could say "You're editing events".

And then the following question could be "Do you want to continue editing?" with the answer options being "Yes" and "No".

Now read the whole thing again. It is more conversational and flows nicely.

Answer given above is excellent, I just want to notice, that in iOS apps, you should avoid using YES/NO answers in alert view.

You can find it in HIG

Use “OK” for a simple acceptance option if there is no better alternative. Avoid using “Yes” or “No.”

I believe, that the reason for this is that user really have to understand the question until he is sure which one to select.

Read HIG especially part designated for Alerts, you can find answers to all your questions ;) iOS Humant Interface Guidelines

6
UI for saving changes in document-based mobile app?
1
Is it good or bad to follow iPhone native look and feel in design of mobile Websites?
2
How to edit only one list in a split list view?
7
What user-friendly term should I use for a view that lives under a tab in a tab bar app?
0
Presenting a list of items on a screen that already has a list
4
What is the acceptable number of "intro" screens for an iPhone app?
1
Best way to divvy up screen space in pictorial article mobile app?
2
Where to put 'Home' button in iOS UINavigationController
1
3D Touch for 6s users and long press for iPhone < 6s?