How to display points of interest, waypoints, trails and maps?

I am redesigning a screen in my iPhone app, Gaia GPS, that displays details about points of interest, as well as user-created waypoints, trails, and maps.

I have come up with a new mockup: 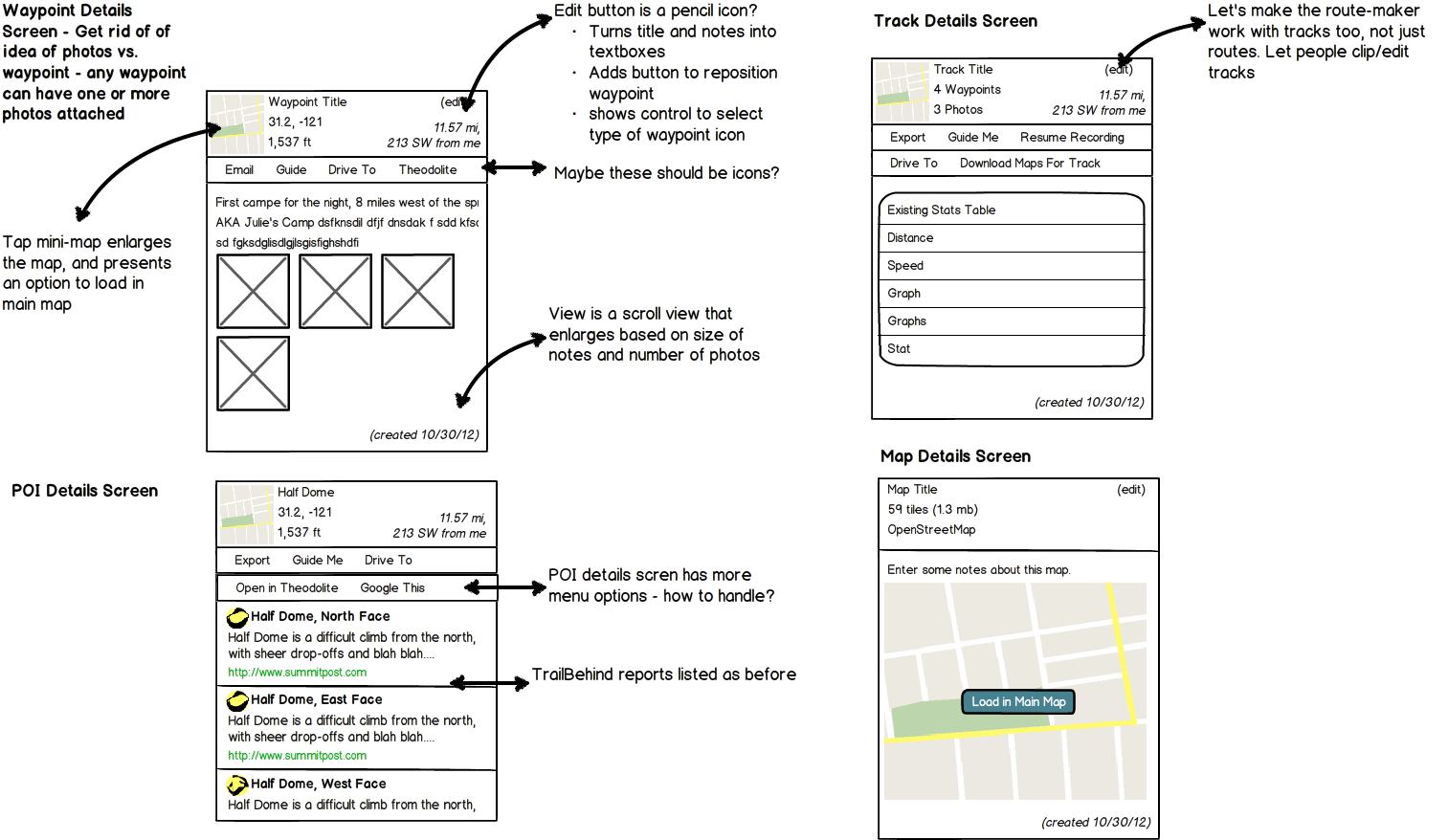 What is a good way to design this screen?

You say "Half Dome" at the top. Don't keep repeating it in your labels.

For example lets use a UX site. You wouldn't want the buttons to say: UX Chat UX Meta UX About Us UX FAQ

You can just get rid of the common word. Only use it as much as necessary. This is a usability tip I learned in Nielsen's Homepage Usability: 50 Websites Deconstructed

As for the nav problem, I'd need to know more about Theolidite. Do users really want to "google this?" Is that really helping them or taking their attention and making the user experience worse?

You try to sneak too much information into this screen, that's not "iPhonic".

I won't detail how to design for iOS devices, there are books written about just that, and I'm not that much an expert of the topic.

However, I fail to see your scenarios.

Apps are there to solve actual human problems.

Noone has the problem, for example (from the same domain), to "see Manhattan in 3D", unless it helps them get a better sense of place on the long run. In our experience, when the novelty wears off, they rarely use such features. Sure, it looks cool, you show around to friends, 2 weeks, maybe a month, and that's it.

I know, there are expert users. Yes, they love to have a lot of features, but in fact, even they tend to use only a few of them (albeit each of them tend to use a different set, that's why popular expert applications, like Photoshop, are full of built-in features)

In general, the rule of thumb is: prepare for the common case, but allow the rarities.

Another topic I think should be worth noted, is context: the single biggest challenge of designing for a phone, besides the screen limitations, is that phones are used in an awkwardly broad range of contexts.

A GPS tracking software can - and will be - used while riding a horse, for example. Or while driving. Or while riding a bycicle. All the three pose real, unique challenges (the horseback is bumpy, the car is fast, the bike rider needs both hands most of the time), which limit the usage of a complex interface.

Complex interfaces on touchscreens are also hindered by the physical size of a finger: you just can't have too small controls! All mobile platform creators have specific advices to that.

Scenarios are usually made by

In a "proper" UX design process, all those buttons are there, because they represent a step in one of your scenarios. But you need to list them first.

Second, prioritize these use cases / scenarios.

Not everything will be used by everyone at every ocassion. You simply have to put away some functionality, which will only be used by maniacs, or at least by people who aren't actually driving their vehicle (horse, bike, car, whatever).

I'd at least half the features you offer on the front screen.

Choose the features which should be used also while driving.

If possible, follow Apple recommendations (toolbar on the bottom, with icons and text, titlebar at the top, with at most two buttons, in which one is to provide a "Back" functionality).

Look at built-in applications like Mail for example. Or Safari. Toolbar at the bottom, titlebar with a few buttons only at the top.

If you're designing a Maps application for iOS, look at the iOS 5 and iOS 6 Maps. Look at how a POI screen looks like. This is what people will expect.

I know, at the POI screen in iOS 5, there are buttons on the bottom, not a toolbar. That's also fine, but that interface is scrollable, and still there are not that many of them.

Fourth, automate what you can.

I know that phones are more and more used as primary devices. Still I'd think about uploading the whole thing to a website ("cloud"), where it could be reached with a personal account, so that offline things could be done to a recorded track, on a convenient, big laptop screen.

I know it's hard and a lot of people may actually want to organize their stuff literally while driving but on the other hand, their focus will still be limited. So prepare for that somehow.

Oh, and Fifth: don't forget to get actual usage data from at least some beta-testing friends by adding some statistical monitoring.

Not the answer you're looking for? Browse other questions tagged iphone ios maps or ask your own question.

2
How to edit only one list in a split list view?
1
how to subtly indicate that an address is “mappable” in a mobile app?
1
Fitting big table of data into iPhone
4
Handle Push Notification when app is in foreground
0
Best way to display items and related offers/details in mobile apps
2
Where to put 'Home' button in iOS UINavigationController
5
How to follow ios guidelines when designing in points? How to be sure about sizes of UI elements?
2
How to properly design video player controls for iPhone X
1
How to select a location using Google Maps
0
“Translate” mobile app mockup dimensions from desktop to smartphone size?