How do I represent null values in a line chart?

I am building a web-based analytics platform. I am looking to plot a line chart that represents the number of seconds it took for me to reach a live service agent via phone on a given day.

In the y-axis, I have seconds. In the x-axis, I have date. I place one call per day, so I have one data point per day.

If I call and get an answering machine, I am left with a null data point, because I can't tell how long it took to reach a live agent, since I never reached one.

Currently, I am skipping over that date and just connecting the data point with the next available data point via the line (to show a trend).

However, these null values need to be represented in the chart because I need to indicate that I did indeed make an attempt to reach a live agent every day. It is also valuable to quickly be able to see when I was directed to an answering machine.

There is an added level of complexity here in that I am plotting this for multiple companies simultaneously on a single chart. A friend had suggested that instead of a line chart, I use a bar chart and represent each call with a bar value and that a null data point could be represented with a value of -1. This solution works great if I am only plotting the data for one company, but having multiple companies makes it less attractive since too many bars clutters the chart and makes the trend for a given company a bit tougher to decipher.

My best idea so far has been to represent each null value as a zero and simply change the marker on the datapoint to be a red "X" to indicate that it is a null value and not an actual zero value. The feedback I have gotten is that it's not an accurate representation and that it messes up the trend of the chart by lacing it with spikes. Here is an example of my idea: 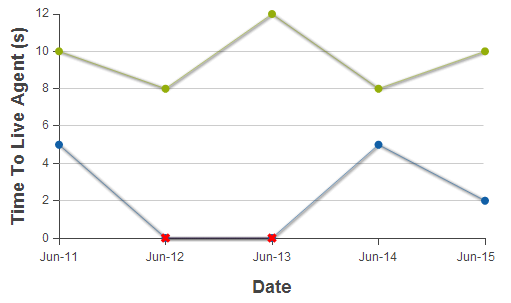 I am really struggling with this issue and appreciate any thoughts or feedback.

Have you considered a line chart with dots. You could use hollow dots to represent the missed information. This wouldn't effect your trend with spikes but would allow the users to see how often the connection wasn't made. 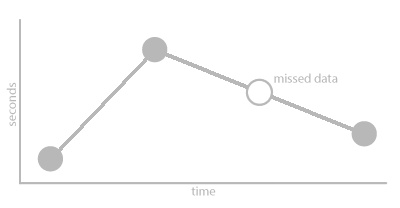 You have two graphical representations of the data, the dots and the line. For the line, I would recommend gaps where there's no data, rather than interpolating a line. This makes it really clear to the viewer that it's discontinuous data. Separately, for cases where you tried and failed, you can use the X instead of the dot. You'll want a consistent place for those, so that someone seeing the break in the line knows where to look (to see if you tried and failed, or didn't try). Since the top of the Y axis is the worst-case scenario, that seems a logical place to put them.

This approach introduces a problem for showing multiple companies (lines) on the same chart. Two approaches: do connect the lint to the X, but not the one from it (so you still get a gap). Or, preferable IMO unless you have a large number of companies, color-encode both the line and the X for each company, and leave the lines discontinuous. (You might want to jitter the Xs slightly to cover the case where more than one company doesn't answer on the same day, unless you're making those calls at different times of day already.) The discontinuity in the line is the primary thing they'll see and it communicates "missed a day"; the "X" at the top, or its absence, will tell the user why.

We used blank before and got user feedback it is not clear and confusing so we recently changed it. We now have a gray line that goes between the existing dots, other lines are with color and gray means "no data" in other places too. We didn't get feedback for the new presentation yet... From generally talking to users I wasn't able to get a clear answer yo what is the best solution to this. If you can do AB testing with some real users, it is probably the best. Nurit

Since no answer is a "special" value in this case and zero is not an accurate representation of it's meaning in a line chart I would leave gaps in the line to remove it from the trends (fortunately, most charting widgets support this technique too). To draw attention to "no answer" in within the line chart, try using annotations.

If "no answer" data is important to the user, then I'd analyze that data separately from hold time. They data has different meaning and isn't directly comparable, so if both are interesting to the user, analyze them separately. I've put an example of what I'm describing below: 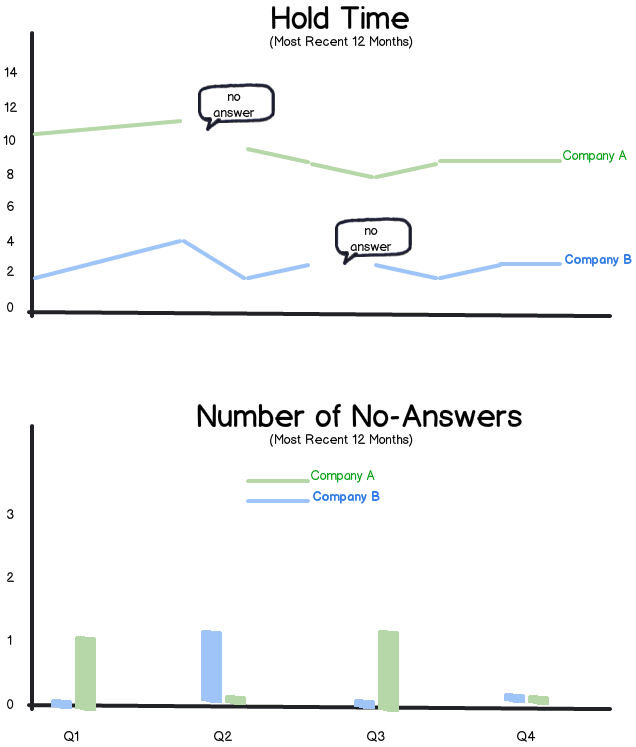 BTW: If you have clear targets to compare the data to or maybe historical data to use as implied targets then there there are probably more interesting ways to visualize the data such as bullet graphs or maybe a deviation column chart to show hold time or no-answer deviation from industry averages or some other useful comparative data. As showing "time to live agent" in minutes may not be as informative as using some other comparative measure such as the historical data or industry averages.

Not the answer you're looking for? Browse other questions tagged website-design web-app layout info-visualisation or ask your own question.

5
How to indicate that part of a chart can be re-scaled or redefined visually to present a clearer, and/or more specific representation of the data?
8
Necessity of y-axis label on a line graph?
2
Chart axis autoscaling
1
how to display multiple graphs on a single page?
6
Representing time intervals in a chart
5
Visualize realtime timeline chart
1
How to visualize progress in categorized data?
3
What is the best chart to present multi dimensional data?
3
Improve line graphs on responsive mobile view
1
What is the name for a plot that shows data at each X,Y coordinate