Best way to show many user actions for table rows?

I currently have a table which shows a row for each created form a user has. For some users this will only be 1 or 2 items. For others, they'll have 40-50.

For every form there are many actions available based on the status of the form. If it's "incomplete" you can edit it, delete it, show a read-only view, PDF version, etc. If the status is something else, "edit" and "delete" may be hidden but you get new options.

We've noticed some severe usability/discoverability problems with the way it is now and I was hoping you guys had some suggestions on improving things.

Here's how the table looks:

As you can see, the most common actions are displayed to the right of each row, to a maximum of 4. However, there is another menu when you hover over the hyperlinked name:

(We originally copied this idea from Sharepoint)

When the user clicks the background of the cell - but not the hyperlink - they're shown the following menu: 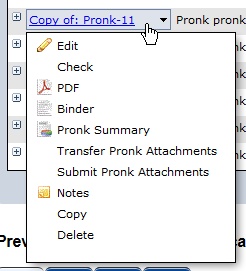 As you can see, there are many more options than we had room to show on the right-hand "Options" column.

There's another similarly activated menu in the table header. We call this the Table Menu for lack of a better term (please suggest a better term!). When you hover your mouse cursor over any of the column headers, you see a blue button with a down arrow: 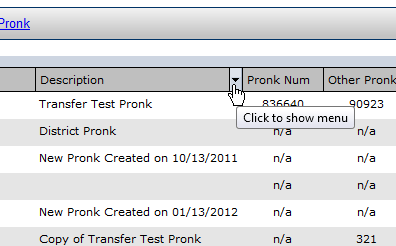 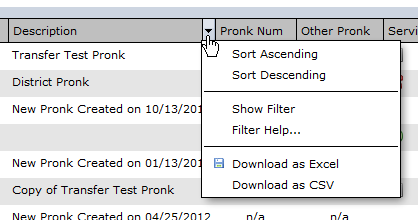 (We originally went with a button because if you click the header itself, it resorts)

As mentioned before, we now know these were terrible choices, especially the first example. Users have consistently failed to discover the functionality and we've got seasoned veterans with 4 years of working with the site who don't know these buttons are there. Clearly it needs to change.

Do you guys have suggestions for how to improve either/both of these experiences?

You could proceed as follows:

Regarding 1.: For example, the column description doesn't need to be as wide as the most long word in the column. You could introduce a line break, if a certain width is exceeded. This article gives some inspirations for the design of data tables in web applications. Additionally, maybe you find a more space-saving representation of the "Completed"-Column.

Regarding 2. and 3.: From the number of available actions, I conclude that your table is used very interactively. I don't know your context but I guess, that the user usually spends some time with his selected record transferring, submitting, editing and so on. Maybe expandable rows are appropriate in this case (see the links below).

Ask yourself: what are the most important and most frequently used actions? These actions should be displayed first (for example, maybe "transfer/submit of pronk attachments" is in reality used more frequently then "pdf" or "notes").

Further inspirations you might get here: Article at UXMatters.com

Regarding the 4 popular actions you have in the "Options" column:

If you have more than 4 actions, you can change the fourth action to "More..." and when clicked, show the complete context menu for this row. This is much harder for a user to miss.

A partial suggestion - when the user selects a particular row, expand that row into something much taller - say, 5x the height, that shows more detail about that item.

You then have more room to display available actions, and maybe even do away with showing actions on non-selected rows.

While this does introduce some behaviour that doesn't have a visual affordance, it's something that users will quickly learn.

From the looks of it, this application is one used by experienced users; in terms of Alan Cooper's book About Face, a sovereign application, where it can be worthwhile providing more power at the expense of some complexity.

Regarding the row actions (Edit/Check/PDF/Notes), I suggest the following approach:

These are the basic steps.. Consider the following in addition to improve with an alternative parallel flow:

This dual menu approach (right-click + top-level) is used in spreadsheet software like Excel. You can also see it used for copy-paste actions as well, so users should be pretty familiar with it.

I'd add a detail: a tooltip (for that seasoned 4-year user) telling them to right-click to see the actions menu, except for the 1st column that should say open report or whatever it does.
I'd also give the links of the 1st column a "display:block;" style to make the whole cell clickable. Obtaining a different reaction by clicking the background is at least confusing.

For those who could miss the right-hand links, a clickable trigger to display exactly the same options menu, looking like gmail's "more actions" dropdown, or like a wrench, and not taking table row width.

If you are wary of row selection then at least give the hovered row a slightly different background color, to reassure the user about which is the element the actions will affect. Consider using intentHover instead of plain hover events. This plugin delays the hover actions a few milliseconds so the users can fly the pointer over the table rows without the visual noise of a rapid highlihtings and lowlightings.

Interesting discussion. Here are a number of thoughts:

Grid Options: - Add a Tools /wrench/grid button above the grid, far right: should contain actions to the grid itself, not the row specific information. - Remove items like Export to Excel from the Rt Click header (which currently is the blue button with a downward arrow) and place in this new menu - Include such options as toggling on filters (though suggest this is more explicit and easily toggled item, maybe leave option on in grid at least by default and provide option to turn off)

And some questions back: this looks like a tree grid- are parent level actions applied to child rows?

Are the options currently available in anyway related to the status or "Completed" column information? If so, consider how the options appear in the context menu - disabled?

Hope this is helpful. Grids are such powerful options, but precisely because of that, it can be hard to make the interactions with them clear.

Not the answer you're looking for? Browse other questions tagged tables actions or ask your own question.

7
Inline table edits: how to make it quick to edit?
1
View an object that sometimes is editable, but sometimes not editable

13
What is the best way to display edit/delete actions on a row?
9
UX for filtering a table of data
3
Best practice for sorting and being able to "check all" in a table with checkboxes
25
Table with actions per row
4
Columns in a table - settings buttons position
1
Telling user about action when clicking on a column in table
1
Best way to display a list of items on which the user can take identical actions
2
Status (Action required) and main actions in a big data table
0
Data table bulk actions which are independent of each other
0
Filtering and Sorting a Table that has multiple rows per User row