Tooltip Verbage: "This will prevent changes" vs "Currently allowing changes"

I have a series of inputs used to allocate a large budget into smaller groups. Once a group is changed, the rest would auto-complete with the remaining budget percentage. We would like to be able to "lock" a group, preventing changes to while still allowing the rest to update.

The "lock" icon will have a tooltip to let the user know what that does before they click on it, but I'm struggling with the verbage.

Currently, the unlocked icon's tooltip would read "Prevent further changes to this group." This implies that when the user clicks, changes will then be prevented. But, should this be the other way around? Should it instead read "Changes are allowed for this group?" 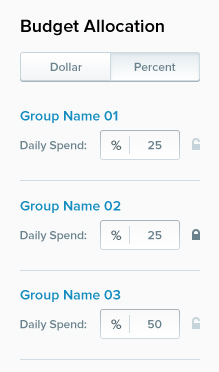 Have a look at this question, because it is closely related to your question: Should a toggle button show its current state or the state to which it will change? Especially read the accepted answer.

In my opinion, the tooltip must correspond with the action, not the state. The reason for this is that the tooltip serves as an extension or a clarification of the icon.

To make it even more clear, I suggest you use "Click to prevent further changes to this group" as tooltip.

If you use Gmail, look at its archive/report spam/trash buttons - they are tooltipped with the action being taken. Your use case is slightly different because it's a toggle rather than a one-time action, but IMO your initial impulse is correct.

It would be slightly more intuitive if you were to make the lock icons into buttons instead of icons - since a button is always associated with an action, that makes the association between the tooltip and the action even stronger. Your project requirements may not allow this though.

Not the answer you're looking for? Browse other questions tagged buttons icons tooltips or ask your own question.

491
Should a toggle button show its current state or the state to which it will change?

1
How should I display this information if not in a tooltip?
3
How to prevent users from submitting a form with no changes made