Should I lock to portrait my iOS app?

I'm developing a "reading" app for iOS. I'm wondering if it's useful to have the app running both on portrait and landscape mode.

As a reader I usually keep books (or my kindle, or my iPhone browser, or any little device) in portrait mode and for sure I'll have more space for text in portrait mode.

Apple's iOS HIG are vague about this, by just telling: "in landscape, show more".

I like Kindle App approach: every menu his hidden and only text is visible.

But is this really needed???

I agree with Benny's answer and I will amplify it by adding a real-world use-case that baffled me when I first encountered it: the iPad dock. 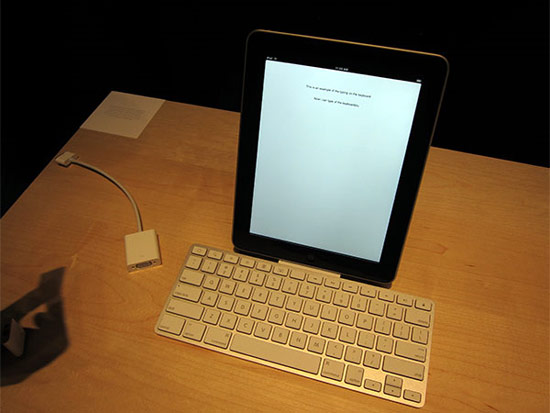 The official iPad Dock (with or without the keyboard) ensures that the iPad remains in portrait orientation. This is not the orientation most people, I believe, want to do things like watch a film in (especially films shot in 16:9).

Combine that with the orientation-locking behaviours of some apps, like Netflix (at least at one point in the past), which lock their interface in landscape orientation and you've just created a completely unusable user experience.

If your user wants to watch a film in portrait view, for whatever reason (maybe they're laying in bed in an awkward position and they just can't hold the device in a certain orientation), they should be able to. The same goes for a reading app.

The point is that you have a device that you can use in any orientation and which is designed to allow for that. Why reduce the application's functionality and the device's usability by disabling things it's built to do?

I'm sorry to say this, but what you do when reading is not important. What your users do is all that matters. So you have to ask your users how they read books on a handheld device. If 90% or more say portrait - then you can use portrait only (and lose the 10% landscape readers, if your business plan say so). But if you don't have enough data to say "yeah 90% read portrait" then you implement landscape reading as well. As a courtesy to your users.

This is not important, but as a side note I'd like to add the following: I'm a really strange reader since I like to switch between portrait and landscape reading depending on what I'm currentli reading. If it's a code tutorial book: landscape. If it's 50 shades of gray - portrait reading mode

I want to add to the above answers: While locking the user into one option is a bad thing, allowing the user to lock the device into an orientation is quite the opposite. For example, when reading in bed, if my hand slips sideways a little, the whole app reorients itself, causing disorientation; an option in a menu to prevent that on a per-app basis (like some apps have) can create a better user experience.

It is also about text length. If you have too many words in one line, it is getting harder to find the start of the next line (as an example, open a Wikipedia article on an HD monitor in a maximized window). So if you add a portrait view, I propose considering to have two columns instead of only one - but that also depends on the screen and font size. At least on an iPad, the two-column version would probably be a benefitial extension.

In general, I would argue for adding a portrait mode because these devices are made for switching. I agree that this might introduce some side effects when reading in bed (and in my experience also in cars/busses, particularly when driving a bendy road), but usually you can turn off automatic switching globally (is this true for iOS?). And I think globally works better than locally here because you do not want to get landscape format again when you open another app.

Most iPad cases (including the Apple Smart cover) support raising the case along one of the "long" sides, meaning that if you use most cases to prop up the device, portrait orientation is unusable.

2
iPad Calculator App Portrait Only?
8
What is the rationale behind not providing Dashboard/Home screen landscape mode?
5
When to show a lock screen (iOS mobile app)
4
Trying to build intuitive simple user interface for an iphone app
9
Can we assume users know the devices they're working on?
8
Modal views vs popovers in iPad
12
How to indicate that a list view can be swiped to reveal controls?
4
iOS lock screen has letters
3
What's a good scrolling hint for partial-page content in iOS?
1
Smaller font sizes on smaller screen devices