I am creating a mobile application that can be used as a counter. This app would be implemented in full-touchscreen phones. Here is part of the screen: 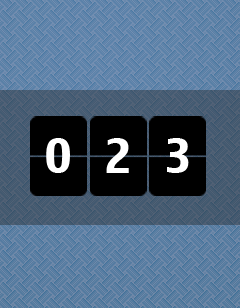 I want to indicate that users can either tap or slide upwards on the translucent black area to add the counter. But I am stumped. Any suggestions?

The default behavior from a user will be that they just try to touch anything that looks like it could react to touch. Your mockup only shows the numbers in the first place, so chances are that the first thing users will try is to tap directly on them.

Generally, this is a problem the OS designers also face, so a look at their solutions provides further insight:

The key is, as has already been mentioned, that your design is lacking affordance to slide. In my opinion, it lacks any affordance at all – the user will probably still try to touch the numbers, but that's not because they afford it. It's because there's nothing else they can try.

However, the numbers don't afford sliding. You're going for a split-flap display look – now in theory users could make the connection that these are, mechanically speaking, plates rotating on an axis. On the other hand I'm not so sure how many of today's smartphone users have ever owned a device with a mechanical split-flap display, or have seen any "real world" example of it at all.

So, going by the examples from the OSs you could try to …

Another, more general question: Why is the touch-sensitive area limited to the grey area? Are there other UI-elements above and below it? If so, they may draw users' attention away from the numbers. If not, why is there "dead" area instead of everything above the numbers increasing the value, and everything below them decreasing it?

Indicate that a touch-phone needs to be touched in order to change anything? Users know that already. You need to show them when they tap something that they can do something else. Like on Windows Phone, you could tap a number, and you'll get a column of numbers in return. What to do with it? Swipe vertical - maybe? And then, when your satisfied with the number, touch again? Maybe? 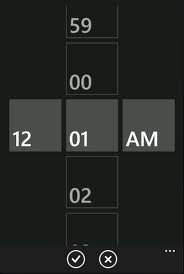 That's a relatively simple screen, so a user is more likely to experiment on it. Reward them quickly and easily with the right type of movement and that can do it.

The other possibility would break the styling you have, but if you can give a glimpse that there's more content (quarter of a number, etc.) then a user will more than likely understand (a smartphone convention at this point).

Not the answer you're looking for? Browse other questions tagged mobile click or ask your own question.

4
How can I indicate that images can be clicked on a mobile site?
2
Android app: informing users that an image is clickable

0
Usage of darker shade to show selected/focused button
7
Suggested mobile approach to dual actions
4
Click and drag affordance
7
Having the "Hamburger Menu" to the right, shouldn't menu items be right-aligned as well?
0
Intuitive way of presenting options on toggle-able items
2
UX solution for data points display and other good tips for charts on mobile screens
3
Mobile swipe view with multiple gestures, what would be the best approach
3
One click order alternative - slide to pay
1
Having Trouble with Nested Line Items in a Mobile App
8
Alternative to right-click on mobile