I came across a Facebook app/tab for a brand that required that the person Like the brand before being able to submit the form. I'm used to normal "like-gates" in which a splash screen is shown saying you have to Like the brand before being allowed to fill out the form. However, in this specific case, the Like button was "step 4" on this particular form that didn't have a Like-gate.

Here's an example of the form: 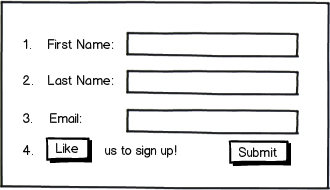 This seems to go against some of the Like button guidelines; however, does anyone have any feedback on if this is 1) allowed and 2) something that is a good practice?

I have my personal thoughts on this practice; however, I am curious to know if anyone has any data or experience with this type of layout.

They're leveraging Sunk Costs, a powerful psychological effect. Since you've filled out the standard parts of the form you're more inclined to click the Like button; bailing out late means abandoning all the work you've done. Even if the "cost" was something rather minor like this, you're likely to see less of a bounce rate than you would with a form that started with a "like to sign up!" intersital page before the form was filled out.

However, this is definitely a Dark Pattern as it's (ab)using psychological tricks to help the business encourage behavior that's good for them but not really good for the user at all, as Liking a page is now essentially signing up for marketing/shares from that page.

Also note you're excluding users without a Facebook account or who choose not to Like random companies/share your info with them...but that's likely irrelevant to the business decision at work here; those people wouldn't have Liked the company's page anyway. Since the focus is on that, not the user, user goals are abandoned; surely you see the problems this line of thinking can cause.

So, "should" it be done like this? It's a wicked thing to do and I wouldn't recommend it, but it may well increase conversion rates over a form where the "like" was required first. Of course I wouldn't recommend requiring the like at all; it's better to have one engaged user that actually reads your facebook posts and shares them than to have 50 users racing to unlike/hide your facebook posts immediately after signing up.

In addition to the other comments discouraging this, it should not be assumed that the user even has a Facebook account. In this case, the form effectively requires the user to sign up for Facebook, which will almost always amount to an abandoned form.

No you shouldn't. The only right answer is to provide the best user experience possible. Un-needed extra steps, no matter how small, are unacceptable. Extra un-needed steps that feel, and ARE evil to any degree are further unacceptable.

Is it a good idea from a business perspective? Doesn't matter, bad UX is bad UX. Period.

There are further deeper reasons this has big pluses and minuses from a business perspective, but that is not what UX is about.

That said. The option to 'like' is fine. This issue is requiring it. Personally I don't necessarily want all my friends to see that I signed up for X or receive future communications from X. As a result, I may choose to not sign up at all, even if I originally wanted to. Privacy is a real issue; so practical form completions may actually go down, in the name of marketing.

Just because I submit to some newsletter or support forum or whatever does not mean I actually like that company. Someone is going to be added to my adblock list in this case, even if that renders something else less usable. It's like having to hug a salesperson when all you really wanted was a car or your groceries. And if it is inevitable the reaction may rather be "I need a shower" than "I'll buy here again".

Just don't forcibly link two distinct things. If users like your company, they will hit the like button themselves, or even actively look for your facebook profile to do so.

In my opinion, definitely not ! Not only it goes against good practices, but what would be the reason why a user would be forced to like something before signing uop ?? Unless it is a dictatorial brand, nobody would do it! It's like you would not accept any potential critics from your users or so.

In a nutshell, never do it unless you want to kill your site.

So, we found two important factors:

There is the sunk cost effect, aiming to coerce the user into to clicking "Like" and finish registration.

And there is the increased risk for loosing a potential customer, by disgusting him before the first login.

The first is increasing the count of full registrations, by pushing users over the forced Like;
The second is decreasing the same count, by provoking rejection when pushing him.

There will be some balance between the effects.
When looking at persons that clicked an initial signup link as potential customers, we could empirically find the increase in Likes, and decrease in signups, when disabling or activating the forced Like feature.

Simplifying a little by assuming everything behaves linear, that gives a nice compact number, comparing change in Likes to change in signups, say

which means loosing a signup for every 100 likes.1 That could be good, or bad - hard to tell.

But there is more to it.
There is an effect of the "coerced Like" feature to the users that give in and finish registration. And I think this effect can be strong enough to be relevant.

Assume we have measured that the feature actually does reduce signup count.
So there is some psychological effect that leads to the rejection; let's call it "irritated anger".

Using the assumption that this effect is somehow continuous, causing rejection at some threshold, we see that there are users that have signed up, but were influenced by the effect.

Now, there are two interesting questions:

These are not as easily accessible to empirical methods.
The point I'm trying to make is that they are relevant.

We're talking about a substantial count of customers on the site being irritated and angry about the site to some degree when first visiting it. I think this will make them sceptical about the site, it not to the company. That also directs the users attention to other features that may be intended to exploit him somehow - so he will notice these features when they are borderline acceptable, when he had ignored them otherwise. Also, when noticing negative aspects, he may remember that he had recently made a public and permanent statement that he agrees with how the site is run. And may not like that thought.

In summary, I expect that the users that signed up for the site - remember, each of them was coerced into some action - will see it in a much more negative light, in part based on increasing his attention to questionable aspects, which would normally be tolerated, or not noticed.
This obviously would affect the rate of participation, rate of users not showing up again, etc.

So, no, "Like" on a signup form should not be a required field;
Because - ignoring so many othervalid reasons - it does not pay.
The tricky part is that the total negative fallout is hard to quantify - empirically or otherwise.

It is less noticeable embedded in a list so there will be less resistance to complying with the request. In addition the default action on a form is to fill out the fields so the user will be less likely to refuse due to less attention being given to evaluating the request than to completing the task (i.e. filling out the form). Higher compliance rates would be expected as a result.

5
Instant Facebook 'Like' or link to Facebook page
2
Best placement for validation-summary in a form
3
How to prevent users from submitting a form with no changes made
3
Soft "required" form field?
1
Social sign up or a short field?
4
Persisting form field error messages in a fixed header
2
Notify the user that all form fields are required
2
Submit form on enter without focus