I'm working on a web application for a client which is essentially an inventory management system for a shipping/warehousing entity.

When I was working on similar system, we decided to use drag'n'drop, but with some extra options. Initially, there was one column with wares and drag area (we called it "buffer"), that changed into column with entities after user dragged wares into it from the first column. 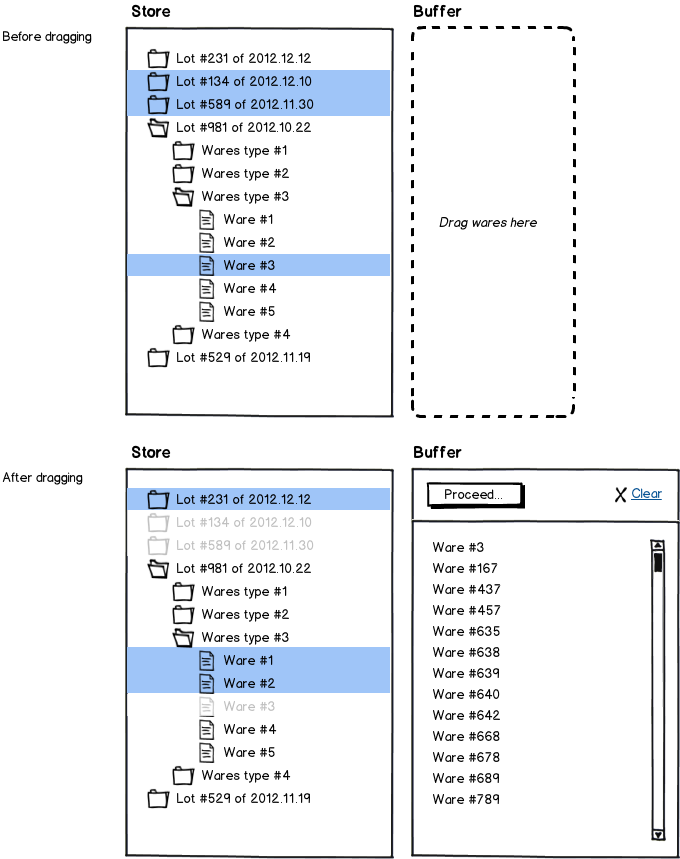 There were such solutions embedded:

P.S. Actually "buffer" was changing size in width, because there was another column on the right for other scenarios and unnecessary in making shipment, so in your case the right column can be unchangable by form.

The more action methods you can provide, the better since some user prefer double-click, others drag'n'drop. Some user may even want to use both methods in different situations. My advice: implement both!

With drag and drop you can rearrange the items on the list, without the need of buttons.

According to the Principle of least astonishment:

exploit users' pre-existing knowledge as a way to minimize the learning curve for instance by designing interfaces borrowing heavily from "functionally similar or analogous programs with which your users are likely to be familiar."

Hence using both methods, will increase the chance that your application will be familiar to a wider range of users.

Not the answer you're looking for? Browse other questions tagged website-design forms drag-n-drop or ask your own question.

9
Best Method to Present a Many to Many Form to User
7
"Click-and-drop" alternative to drag-and-drop, for accessibility (and maybe mobile-web)
5
Drag and drop direction
2
Make click, drag and drop and link between both tables more obvious to user
1
Can I replace drag & drop reorder with "Click to reorder"
2
Alternatives to drag and drop lists
1
Drag and drop vs file picker
3
Drag and drop reordering with large items
2
How to use input fields that automatically get a value while filling in the form?