How to report outcomes of a background task to users?

I have an application that in essence takes files and imports them into a database. As these files can take a while to import, we have a queue of these tasks that get run one-by-one. As such, each task has a status.

We currently have these statuses:

Here lies a problem - the end users of the system want to know if their database has been changed, even if the whole task ultimately failed (tasks can fail to import one specific thing but continue on to the next item). It has been suggested that we introduce more task states to indicate this (so we would have something like Running, Pending, Failed To Start, Completed With Errors, Succeeded), but I'm concerned that this is just making it more confusing for users.

How could I represent what is essentially two separate bits of information better, but still keep it easy to filter a list of tasks visually at a glance?

I guess you have two lists: those tasks which are in queue, and those which are already out.

The pending and running tasks are in queue. Add a play icon to the topmost one that it's the running one, done. 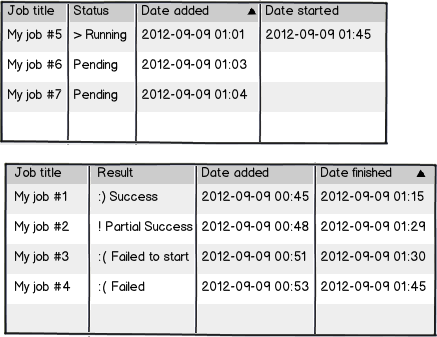 Something along these lines...

Not the answer you're looking for? Browse other questions tagged usability status or ask your own question.

3
Notification when user leaves a page, if a background task is running?
7
How to handle long processing task in UI?
6
How should I alter my programs progress bar?
3
Do fine-grained message statuses (such as when a message was seen) help usability?
1
Why are the users complaining of getting lost using this navigation menu?
2
UI design for task with status indication
3
Naming "Long running tasks" for a web application
2
Formative Usability Testing - Script
0
Best way to report process status in screen to user
2
How do I treat an 'Incomplete' in a Usability study?