Is Apple's or Google's meaning of the three-horizontal-bar icon more popular?

Apple and Google are going head-to-head to define meaning of the three-horizontal-bars icon:

In iOS this icon means "drag me to rearrange items in a list" while Google Chrome's version means "click me to bring up a menu".

Is one of these two meanings already widely established in mobile, web, or desktop software? Also, which popular apps (on any platform) use this icon and what does it mean in those apps?

I'm asking because we're building an app that has a "list re-order" feature (using the standard iOS icon of course!), but several iOS-familiar folks I talked with didn't recognize the re-order icon. This led me to wonder how popular either variant is. Even if an icon is iOS standard, if it's not used much and the other variant is very popular, then we'll have some user education challenges we want to prepare for.

From a sample iOS app: 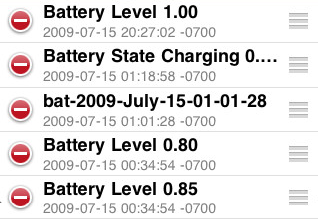 Three bar icons are now being used widely to indicate a "show list/menu" function - it's not just Chrome. Below are screenshots from Day One and PlaceMe (I only had to open a couple of apps to find examples of this usage). 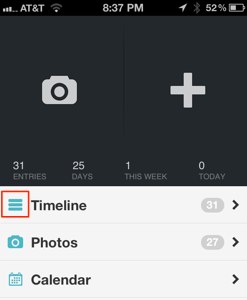 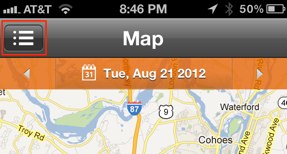 I believe the icon was a poor choice by Apple (in hindsight) - it does not give a clear interaction cue, it's more of a reorderable state indicator. But, let's remember that Apple made this choice before all this app-madness happened.

On iOS, both uses may be able to co-exist without confusion - since use as a menu/list indicator would have a single icon and "reorderable state" would have an icon beside each list item.

A better choice may be to move toward something similar to the "draggable" icon to indicate reorder-ability and let the three bars be a "show list/menu" function cue - as it is gaining traction. 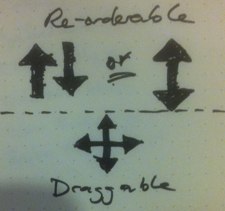 The drag-n-drop affordances usually come from hardware switches and battery cover lids, and this is what those three "lines" mean (they're the "receded" type). But even if you do miss them for 3 lines (compared to Chrome, which are three lines), then we shouldn't expect the users to understand...

Here are a few examples from 'real life': 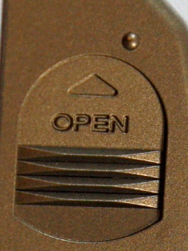 A bumping-out battery lid (from here) 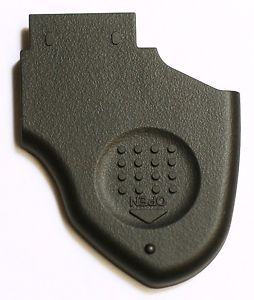 A dotted battery lid (from here)

A receding battery lid (from here)

You can also create the following interaction if you don't fear of breaking out of native: 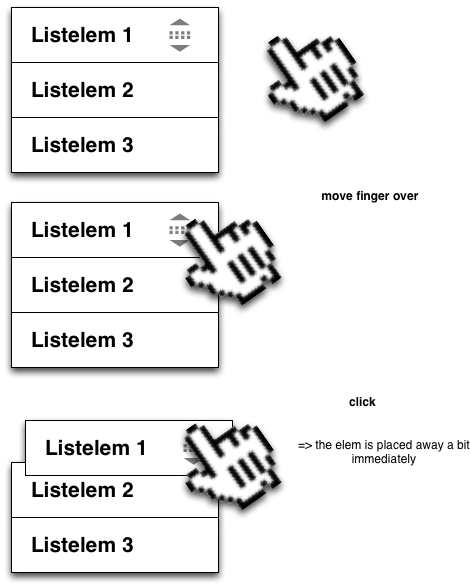 Because of the arrows, the users will immediately understand what is it for (I hope so, this is just a mockup, no user tests yet), and they'll try to tap on it as part of exploring the interface. If you do it well enough, they'll notice the displacement (likely if it happens somewhere between 150-250msec after touchstart), and will understand that it's a tap movemenent.

This is just a tip. Norman's classic "The Design Of Everyday Things" might help you out on this.

Over the years, things have changed somewhat.

Chrome has changed its menu icon to three vertical dots to comply with the Material Design HIG:

Apple has changed its drag-and-drop icon to be visually distinct from the hamburger:

Though the hamburger icon still isn't used consistently (e.g. Firefox and Gnome use it as a generic menu icon), both Microsoft and Google use it for navigation menus. (Apple doesn't seem to use this icon anywhere.)

You can see the icons being used in the navigation drawer recommendations in both the Material and Fluent HIGs.

Matching that icon to the real world examples of the battery door / sliding plastic widget makes sense to me. The Google Chrome icon confuses me for that reason, and I always thought a "gear" or similar "settings" related icon would have worked better there.

Not the answer you're looking for? Browse other questions tagged icons ios google apple chrome or ask your own question.

50
Has user testing found that the “three horizontal bars” for main menu on mobile is commonly understood?
38
What is a good visual cue for drag and drop? (for reordering a list of items)
2
How important is visually indicating that ListBox items are drag-dropable in an application where not every List has this functionality?
0
Apple's Hamburger Menu?

65
Why is Google's “I'm Feeling Lucky” button still next to the search bar?
17
What is the origin / meaning of the icon used for “database”?
16
Has the ☰ (three horizontal bars) menu icon received much adoption outside of the western world?
2
Where should I place the “Actions” button?
6
Defined used for the icon: three vertical dots
8
Vertical and Horizontal three dots icon button usage
1
What's Apple's term for horizontal “swipeable bar”?
4
Do these vertically swipeable views have a standard name?