Buttons for showing None, Some or All of list

etc. and I want to start with them collapsed, but allow the user to view the first 10, or expand to view all. So, I have setup so the user can click/touch the list name and it will cycle between 0-10-All, but I also want some buttons so it's obvious you can do that. I current have some split buttons with 'none, some, all' as the 3 names. I'd probably prefer icons or less text, as it starts to take up a fair amount of room when viewing on a small mobile device screen. I'm open to any ideas?

Update: The lists are unrelated, and internally are sorted. When they are expanded, items appear in between the headings that are visible.

I do like the idea of a 'Showing 10/128' system, combined with a single button that changes text to show what it would do next, like 'More/All/Hide'. 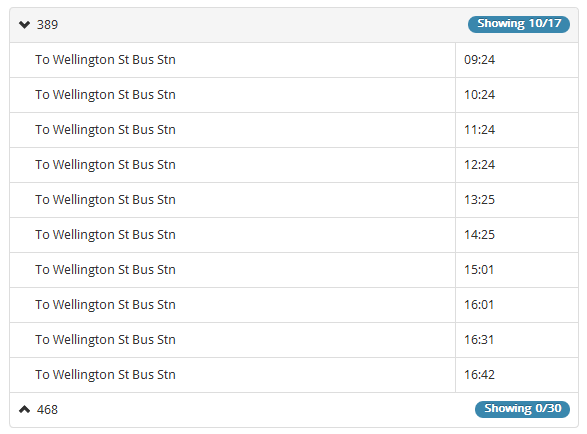 This behaves in the same none/some/all 3-state expansion, but only changes the text on the badge between 0/17, 10/17 and 17/17. I think it works quite well and the V/^ supplies the necessary affordance.

I would use "show more" instead of "some", it's more common and might better align with the users model.

I would also suggest a [+] or arrow down to the left of the results is more common for the all/none, thought this could even be moved to the right.

If you have the room, show more labels. It might not be entirely clear that "128" is the number of results.

Show the "all / more / less only if the user has expanded it, and the number of sub items exceeds a certain threshold (maybe about a screenful)

The current mockup works, but I have the following comments:

Here's a suggestion that comes to mind:

This might require a hint for the column like "showing", or another indication of what the first number represents.

Of course the design of the number needs to be have a button affordance.

I would suggest having a single button (or better, an icon or a link) that initially reads "more..." (to go from none to some, and from some to all). When you display all, the button would read "hide". Simple, intuitive, and third of the visual space needed.

Not the answer you're looking for? Browse other questions tagged web-app buttons lists web or ask your own question.

2
Ambiguity using a Sortable List of Dates
7
Replacement for long drop-down list
2
Should a flash message be used for toggle buttons that perform actions immediately?
4
Should the comments/discussion slide-in from the side?
1
What are some design patterns for a cycle button?
1
Conventions for Current/Active state on a list item
0
List selection, the default is all-selected
0
How to add an empty option to a list?
0
"Undo Changes" & "Refresh"
3
Where should you allocate the edit and delete buttons in collapsible panels?