When should a dropdown be used?

I am working on the design for a large food shopping chain who is holding a contest. One of the requirements was that users can vote for their favorite item online or in the stores. My initial design was to provide something like this to show the voting options 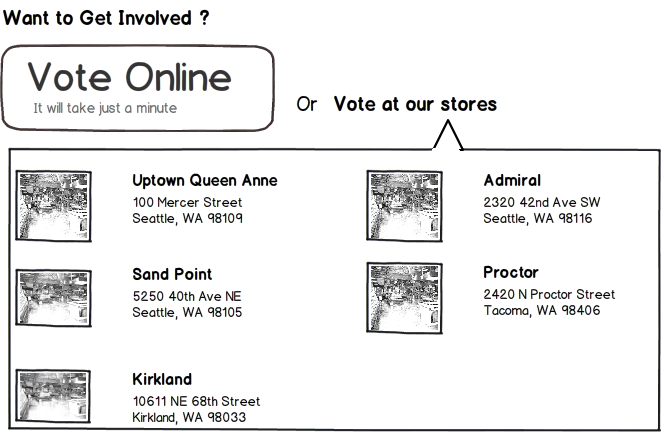 A feedback was given that instead of showing the stores it might be better to use a dropdown instead. I am not a fan of the suggestion since I dont think this would be an effective applicable case for using a dropdown and dropdowns should be only used if you are providing single values and not cases like this which convey a lot of information like store location and photos.

So my question is , what are the use cases where we can use dropdowns and if they would be applicable in the case mentioned above

Edit: I updated my wireframe to convert the initial text based call to action to a distinctive call to action button based upon Roberto De Vivo's excellent feedback

How many stores are there? (ball park figure). I usually let it depend on the number of choices and the information that needs to be supplied to make said choice.

When I have less then say 4 items then a drop-down is not used as it will reduce the scanability/readability of the choices because of lack of overview.

When there are more items I tend to weigh in different factors: context of the items, scrolling in large lists (which breaks the flow of a page) and also unclear sorting could be an issue regarding usability. When you add it all up it will lessen the experience, which is key IMHO in these contest type of cases. Let me say that drop-downs don't win much ;)

I'd go with your original option.

The following might be a good argument againts a dropdrown or combobox (what's actually the standart term for this interaction device, never found out g)

To get the connection to your issue: Providing a dropdown might get the users away from voting online, because they're going to interact with the dropdown instead, that is only there for... well, what actually? Displaying adresses of the five (!) stores? IMHO that's not even the best practice, because your present mock-up allows to scan the adresses much faster and with less interaction then via a drop down. And the adress is presented completely at one glance. The only interaction required is to open up this list; via a mouse hover I guess? In that case I would work a little bit on the wording to make clear that you have to hover (or even more "below threshold" like presenting it as a link and once the user hovers over it, it already shows the list).

Sorry for not quotating the book exactly, I don't have it. I read it when I was working on my study, so I don't know which page the phenomenon is described.

One more argument against dropdown: What items should the dropdown contain? The names of the five stores? So the user will have to choose a store first and see the adress then, just to realise the store isn't anywhere near her, making the interaction a trial and error trip?

Hope this can help when you meet the HiPPO again.

[Button: Vote Online] or vote in person at one of [Hyperlink:our stores].

"Our stores" can either cause the stores list to pop out or take the user to a stores list.

Try this nice jquery plugin solution, which allows you to put images into an attractively styled dropdown:

... do something like replace the social icons in the image below with unique store location icons and addresses:

Not the answer you're looking for? Browse other questions tagged dropdown or ask your own question.

3
jQuery AutoSuggest or Dropdown for Data Input
4
Should dropdown menus be indicated by arrows?
5
How should I implement a 'recently used' list in a dropdown function?
1
What Options Should an IRC Chat Room Button Have?
3
When to use combo-box vs dropdown?
1
Searchable/Filterable dropdown w/ a "None" option: When should the 'None' option be visible?
3
Dropdown menus: Should the parent item be clickable?
0
When should a search box be added to dropdown lists?