Should a special slider value be implemented with a checkbox or not?

I am creating a dialog box for a GIMP plugin that exports images in the WebP format. The dialog currently looks something like this: 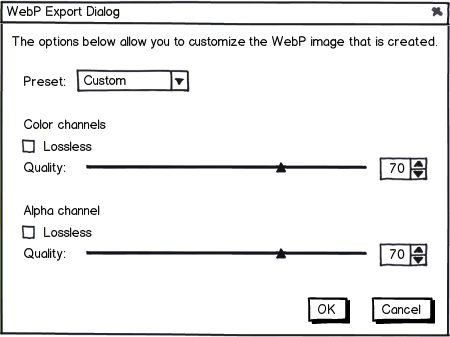 The "lossless" checkboxes each disable the quality slider and spinner box directly underneath them when checked. In the case of the color channels, this is because there is no slider value which represents "lossless" (even 100% isn't lossless).

However, when it comes to the alpha channel, a value of 100% is lossless (and also the default) and therefore I am wondering if the checkbox is redundant. There are two possible implementations I am considering:

I'm having a tough time deciding between the two options. A simple chart indicating the number of steps the user must take in each possible scenario favors the first option:

But I realize making this decision exclusively based on the number of steps required isn't a good idea. The interface needs to be intuitive.

Alpha channel - selecting Lossless sets the slider to 100% and selecting Lossy and setting it to 100% manually doesn't affect the radios.

I think the question you need to ask yourself is would the users know if there is data loss in case of 100 % being set for the color channels.

Though the checkbox will make it a one stop option with two simple clicks, I am not a fan of it since it raises the question about what is the difference between 100 % quality and lossless and that might confuse some user

If you want it in terms of user experience,by allowing the user to slide from 0-100 using a slider, all you are doing is providing him with a metaphor with regards to quality despite that the fact that the most accurate information might be conveyed

How metaphors can improve your user experience

A problem here could be your user may not intuit that "100%" is "lossless"; they may instead just know "I want lossless" and check the box anyway.

IMO what makes the most sense is to leave both check boxes which grey out the sliders for the sake of consistency. You can still allow input at 100% of Alpha Channel to be "lossless" via the slider, giving the user access to both possible ways to set a lossless video; redundancy isn't always bad.

In addition you could leave a grey check (or a dot or a square) in the lossless check box when the Alpha Channel setting is at 100% to cement the idea that 100% Alpha Channel == lossless. It's sort of an implied check; I've seen check boxes with a square in them to indicate a similar state on Windows, but I can't find any images to use as an example.

If functionally possible, you could try making it so checking the lossless box greys out the slider and renders it's input irrelevant, but still allows the user to move the slider. Attempting to move the slider would uncheck "lossless" immediately and switch to lossy mode & set values like normal. It might be a bit unexpected that you can move a disabled control, so you might want to test that, but it does get the best of both worlds in limiting # of steps for both inputs.

Do users really want to control the lossless property seperately for the color and alpha channels? I think I would opt for a solution where you have only one Lossless option, and you only allow changing both sliders if in Lossy mode. It would mean a loss of functionality, because you can no longer get lossless color channels with a lossy alhpa channel, but does that really matter? I think I'd even considder using the link that you often see between values in Gimp, to by default link the values of the two sliders together.

i'd go along with Ben Brooka suggestion with additional tweaks as follows. place both the lossless checkboxes above the respective spinner/value control, i.e. at the 100% mark of the slider. when you tick the color lossless box the slider goes to max and greys, the value becomes NA or Max and also greys. the second checkbox simply goes to 100% .

Not the answer you're looking for? Browse other questions tagged forms desktop-application checkboxes sliders or ask your own question.

3
slider vs. select box / dropdown
0
How to arrange a Slider control with DropDown option
46
Slider control when there is no maximum value
2
Make clear the relationship between dynamic checkbox and other components
2
What's a good control for allowing a user to define colours for numeric ranges?
0
“Slider” with relative motion? What is this called?
0
Should I inform the user a slider actually has a margin?
1
Setting with checkbox and number slider, reduce it to only a slider
0
Checkbox while applying Filters