What cues signal an unchecked state?

The key action on a page is selecting "I'm in" (meaning "I'm committed", which can also be deselected). The logical choice of controls is a checkbox:

I'd like to give this action elevated prominence and integration with other actions by displaying it as a large button with an icon:

My concern is that first-time users might miss the unchecked state and assume a large box saying "I'm in" indicated they're already "in".

What visual cues could be used to leave no doubt the call to action is to click the button to set the state? I'm open to having the use of the combined button and checkbox challenged if alternative ways of giving prominence are suggested.

[EDIT] As some of the suggestions have highlighted, the unchecked state means "interested" rather than be as strong as "I'm out". Interesting how this impacts some of the options.

Lighten the image significantly when out so that the checkbox becomes more obviously the control requiring interaction, and the current state becomes more clearly indicated.

Additionally, you might consider an iOS style slider that makes the current state and the required transition more obvious. 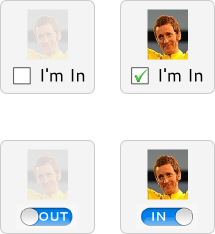 In terms of UI recommendation I think a traffic light indicator for those who aren't colour blind when combined with a descriptive sentence should do the job. See demo below:

Not the answer you're looking for? Browse other questions tagged buttons checkboxes or ask your own question.

13
Tri-state checkbox: Which state should be selected after clicking?
12
Alternatives to the “play/pause” button
6
Triple-State (or Multi-State) UI Object (Button)
5
Edit button or tap to edit
4
Checked checkboxes vs. unchecked checkboxes
23
Should Checkboxes be Checked or Unchecked by default in forms
6
Is a split button valid without proper visual grouping