How do you show non-affordance?

There is a tendency to use badges or status images to show information, but very often these badges look like other items which you interact with, such as buttons.

There is a lot of information on affordance and how to indicate it, but what about on how to show non-affordance?

Background: I'm working on a mobile app where we need to show the status of an item (think of the listing of apps in the AppStore) as being inactive. The most elegant way of doing this seems to be using a status icon on it, but some people try to interact with the icon. So I'm looking for ways of making it clear that it is not something to interact with. The question however would be more useful to other people if the answers are kept general.

To satisfy the first, the method is simply stated: avoid techniques that are typically used to afford interaction with an element. What you're doing here is not adding in the various design cues like shading, onHover states, contrasting colours, and so forth.

The one element which almost everyone can agree is usually non-interactive is uncoloured plain text. The simple (or lack of) styling on elements like this means that they don't stand out. Users also have a mental model of the internet (built from general web practices) which suggests that plain text doesn't usually do anything. If you have status messages, for example, you could render them in plain text and not give them any major styling or animation. By presenting them in this way you are not affording any action with them.

Various other attributes of affordances can be avoided - funky colours, shadows, animations, onHover effects, borders which look like buttons, mouse cursor changes. Keeping an element plain means that users will have less reason to believe that it affords an action.

One other technique is to present something which is more obviously an interactive component. If you're showing a status message, then perhaps you could add a control which hides the message or performs some other action - because the affordance will be much more obvious, it is more likely that the user will act on it by preference. This is the same principle which suggests giving more visual weight to the action you want a user to perform when they're presented with multiple choices.

To satisfy the second is more difficult, but there are examples. There are a number of cues that actively suggest that a component is inactive. By doing this, you are relying on the user's memories of having encountered similar items in an inactive state.

Inactive items will seem to recede from the design or blend in with it. A common example of this is greyed-out icons or text (or more generally, elements with a lower contrast than active items). They will also lack the various other affordances that active items have.

In particular icons or badges could blend with the surrounding content in such a way that it does not look like a self-contained object. Buttons are easy to press and afford their pressing largely because they are contained - avoid containment and users will have vastly less opportunity to interact with the icon. For example, try this:

There are a few other methods, but these are by and large the most common of directly indicating that something is inactive.

And finally of course, it's worth investigating other solutions to the deeper problem. As others have suggested, using the affordance to your advantage and adding functionality may be one solution, as might simply removing the icons themselves altogether if their presence causes more problems than it solves.

I think you'd need to look at your site and see how affordance is currently shown - are your buttons shown as raised, do you have mouseover states, and so on? I'd also be interested to know how you know that your users are trying to interact with the icon - if through observation, can you ask them why? Is there a way you could turn this to your advantage - can you improve the UX by making the icon an interactive element?

I think you hit the nail on the head with this statement:

This is a mobile app, so look at general example in Android, where a simple flat icon is used as a "button".

The problem may not be the lack of affordance with this item. It could be that items which should have affordance don't. You should look into not just removing affordance from this item, but also adding affordance to actionable items in the interface.

I don't use an Android, but "graying out" (=low contrast as the previous answerer said)?

I wanted to also say about playing with less deep in emboss, shorter shadows, whatever, but whenever I say this, I have to look at the unchecked checkbox widget in android, for which I always have to remind myself as a user "no, this isn't disabled: this is a non-checked checkbox"...

In the old black&white mac os times, we had this dotted notion, removing every second pixel from the foreground.

I tried out now, I guess it still does show disabledness pretty well.

However, it depends on the PPI, and the user's own eyesight... for me it works, but I don't have a big bunch of different android devices right here... 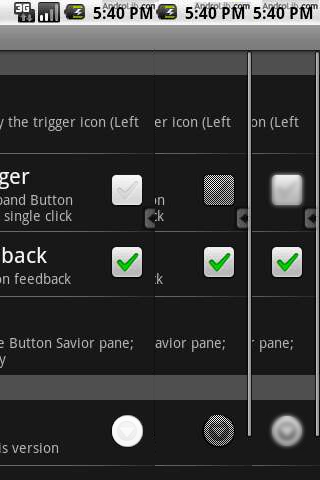 (and here's a link for the original image, just to be correct, I hope it's eligible to fair use - I mean, hey, it's a screenshot of Android's preferences...)

Not the answer you're looking for? Browse other questions tagged mobile buttons affordance or ask your own question.

14
Chart drill-down affordance?
23
Is there a difference between affordance and discovery?
25
How to indicate container is scrollable without scroll bars
0
How do you usually gain brainstorming idea on how to design Android mobile app page
2
Is there a way to represent information with an icon in flat UI or have they to be always actionable?
5
How do you share app specific content?
6
Can username be omitted if profile picture is present for an “account options” button?
3
How to differentiate actions that navigate away from a webpage vs interact with the page
1
Mobile: How to indicate presence of landscape mode and expandable elements?
3
Affordance for dismissing the search function