What is better - window buttons on the left (OS X) or on the right (Windows)? [duplicate]

Possible Duplicate:
close button on the left or right side?

Windows has window buttons (minimize, maximize, close) on the right, OS X on the left. Is one of these objectively better or is it only about what is one used to?

Back in 2010, Ubuntu linux distro controversially switched the window control position from Right to Left.

Ubuntu 9 - with controls on the right

Ubuntu 10 - with controls on the left

The main reasoning for the switch was that they were planning to incorporate some new window management features on the right side some time in the future. 2 years and counting, and that hasn't seem to happened. And the controls remain on the left side. Some users still complain about its position, but others have warmed up to it. In fact, with some utilities, you can change the position back to the right.

So one can argue that the optimal position simply comes down to user preference.

Even though Microsoft Windows has the window control on the right side, it also has the same exact exact controls on the left side via dropdown menu. In fact, the if you double-click on the icon, it closes the window. 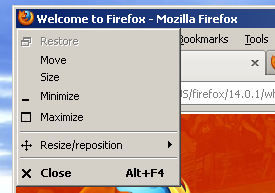 You can also right-click anywhere on the window bar, and you get the exact same dropdown menu. So one could argue that MS recognizes people's preferences, and provided the most flexible approach that works for everybody.

Not the answer you're looking for? Browse other questions tagged window-management window or ask your own question.

10
close button on the left or right side?

7
What is the best way to manage windows?
14
What are the advantages and disadvantages of multi-window functionality vs single-window functionality?
5
Is it good UX that in Windows 7 & 8 the “windows” of the same application are automatically grouped into one button?
3
Dealing with multi-window interfaces for desktop applications?
4
What's the point of closing windows by double-clicking their top-left?
27
Why does the green “+” button in Mac apps only maximize the height?
1
Multi-window workspace - how to handle resizing the parent window
1
Standard for using the system tray?
1
What's the approppriate term for the window under the mouse cursor?