Having lots of checkboxes and an extra action for each checkbox

I am using a similiar interface to Lisa Tweedie's awesome answer to my question on what to do if you have too many checkboxes.

I am going to be using an interface similiar to this for selecting groups a user is part of. A user can be part of none or multiple groups. One group will be nominated as his primary group.

One possible way I thought of: 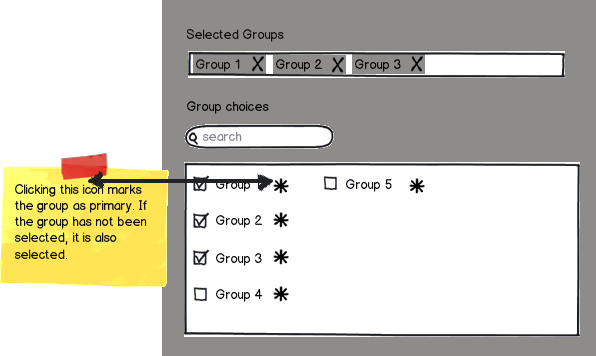 What are some ways to achieve this with the interface? The interface needs to be designed with the assumption that there can be an infinite number of group choices.

I'm not convinced that an infinite number of group choices can be realistically shown in the bar at the top, but assuming that there are only four or five out a large number of possibles, it might work.

A two-state control is needed for "Primary" — either a group is primary or it isn't. This is similar enough to browser favourites for a coloured star to be a candidate: the coloured star indicates the primary group.

I have no idea how this interface is to be made accessible. At the moment I can only think that a purely text-based set of pages would be needed (using the search function is most problematic; everything else can be made reader-friendly). 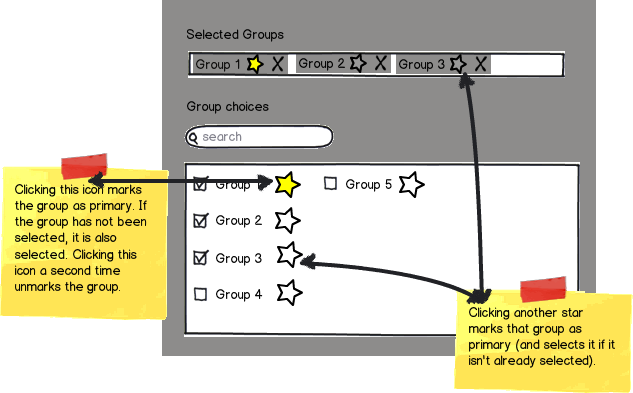 To address your problems:

Not the answer you're looking for? Browse other questions tagged forms checkboxes or ask your own question.

19
What do you do when you have too many choices in a checkbox field set?

4
How can you combine multiple dropdowns into an apparent single control?
6
Interface for linking multiple email addresses and addresses to an account
5
Designing an interface that contains text fields as well as a datatable
17
Where do you put the delete button if you have delete, cancel and submit?
9
Does a list of checkboxes necessarily mean multiple choices?
11
What's a good alternative to cascading checkboxes?
3
Should clicking on a checkbox and a table row produce different actions?
8
When designing a form, should I favor consistency over optimal usability for each input?
0
Checkbox having effect on another checkbox
4
Clearly differentiating between radio buttons and checkboxes in funnel