Screen sizes, how do we determine standards and what are they?

Recently I have been doing some research on screen sizes and realized that I had to rethink many of my previous assumptions. As a UX professional I feel it is of utmost importance to understand and confidently communicate which screen sizes to target. Searching this forum gave nothing recent enough.

And so here is a bit of synthesis of my current thinking on two things and I want your input on them:

When a design grid is considered:

First, to my knowledge, there are no standards here (at least no formal ones). The de-facto standards we have (like the 960px one) come about because of manufacturers more-or-less standardising hardware screen resolutions (lately with the help of VESA).

Microsoft recently posted their telemetry data in this area for Windows 7 users: 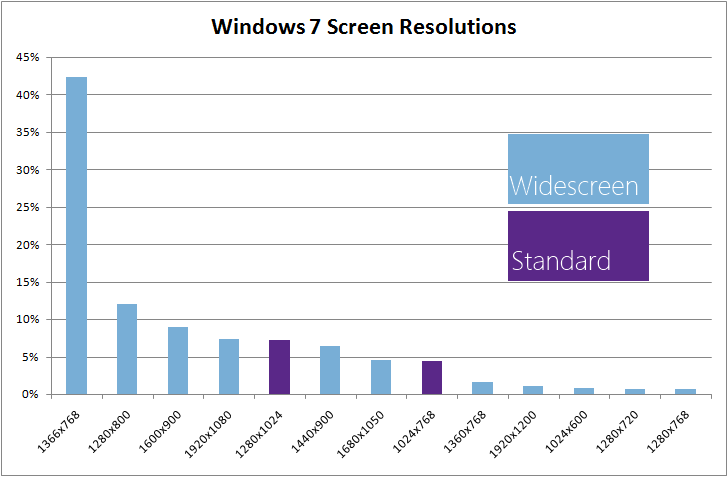 As the chart shows, classical 4:3 and 5:4 resolutions form a tiny chunk of users compared to newer 16:9 and 16:10 displays. It shows, too, that the horizontal resolution (which seems to be what you're asking about) is effectively always at or above 1024px.

Depending on your audience that may be enough, but some factors should be considered:

Ignore all of that and research 'responsive design'.

Not the answer you're looking for? Browse other questions tagged standards screen-resolution trend or ask your own question.

11
What screen vertical resolution should I cater for on non-phone browsers?
20
Is viewport size a useful design constraint, and how are viewport sizes distributed?
3
How big is the cutoff for screen compatibility
2
What are the standards for expected time to 'First Contact' with client for an electronic communication?
2
What are common resolutions for projectors?
21
What was the reason behind total transition towards wide screen displays by the manufacturers?
2
Question about Material Design dp and screen sizes