Tree for database objects and other elements

I am working on a database management application and I store the database objects (Tables, views, triggers, etc...) in a tree and I need some extra insight in re-thinking the features of the tree regarding to some new feature I have started to implement.

The philosophy of the application is to have a "Solution", this Solution contains more "Projects", the Project contains a "Major version", and all the database objects (such as listed above) are the children of the "Major Version" tree node. 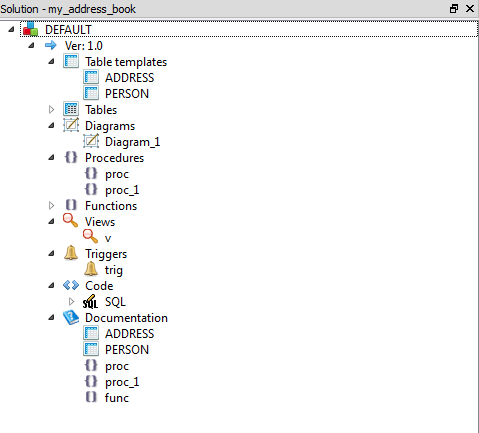 So, as you can see the tree below the version contains a little bit more than just the tables, views, etc, since the application allows you to create also diagrams with the database objects, generates SQL code and documentation too...

I have started to implement versioning support for the application, this in fact means that after the Release of "Ver: 1.0" there will be another tree entry below this, named "Ver: 2.0" which will basically have the same elements as you see right now which totally makes sense, since the user will need to start from V1.0. (However after a release, all the objects in V1.0 will be "locked" and the user will need to specifically unlock them if he wants to work on them (thus resulting version 1.1))

But I have a concern related to the positioning of non-database elements in the tree (Diagrams, Documentation, Code) since versioning for them makes no sense.

I basically have to approaches in my mind to attack this:

what do you think would be the best approach for this?

But I have a concern related to the positioning of non-database elements in the tree (Diagrams, Documentation, Code) since versioning for them makes no sense.

When you change anything in a database, the diagram also changes. Even if it's a tiny little bit switching type on a column from INT to BIGINT. And since the diagram changes, the documentation should also be changed accordingly. Otherwise the documentation doesn't belong within the database and could be published somewhere else (web, DVD, printed manual, Google Docs,...). Code, as in my interpertation procedures, functions and triggers also changes when you make database changes, thus Code should also be under version control - in your screenshot.

It puzzles me that you feel a need to have every version visible, and presumably also idle, like the way you describe your design. I have never seen this kind of previous version representation apart from the version control tool itself (read Subversion). I think you need to step back and rethink the idea of previous versioning, and make use of available and free versioning tools instead of current suggestion.

Always ask yourself what problem you are trying to solve.

Not the answer you're looking for? Browse other questions tagged gui-design tree versioning or ask your own question.

10
Good ways to make a dynamic GUI?
7
Presenting a dynamic hierarchy with a great number of elements
12
Can placing dark and light elements or blocks next to each other in a UI lead to problems in visual perception?
0
Suggestions for how to consolidate multiple admin areas into one?
1
Best option for showing an unbalanced tree
28
What version number format would give users the most reassurance?
5
Represent and edit object graphs with standard OS UI elements
9
How to highlight best elements corresponding to a search without changing their order
2
Alternatives to nested dropdowns?
3
3 controls on the tree - select, expand, open