Is it good UX that in Windows 7 & 8 the "windows" of the same application are automatically grouped into one button?

In Windows 7 and 8, all the windows of every application are by default automatically grouped into one icon on the taskbar. This happens even when there are two instances of the application running i.e. it's still one icon. When you click on that icon, you can choose which window of that application you want to change focus to.

Some would argue that it is easier and better UX that every window gets its own icon on the taskbar, which is possible in Windows by changing a setting. What is the best way to go?

From my perspective, it is a trade off between clarity vs performance (number of clicks). Which is the most important here?

Note: This is merely about the icons, I would prefer if you base your answer on the idea that the labels are NEVER shown on the taskbar (even though that's not true in Windows).

First of all, we have been able to combine windows into one taskbar item since Windows XP, but by default it would happen only when there was no space left. Windows 7 started combining application instances from the get-go. In addition, XP & Vista taskbars would show the number of windows combined under one button: 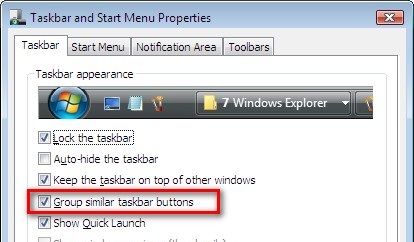 Such presentation obstructs the visibility of system status, one of the key usability heuristics outlined by Jacob Nielsen:

However, there's a workaround that allows having individual buttons on the taksbar, which are just the application icons. You need first to change the taskbar setting to "Never combine" or "Combine when full", then you need to create a string called MinWidth in the registry under the key HKCU\Control Panel\Desktop\WindowMetrics and set its value as either 55 (for "large icons") or 40 (for "small icons"), and finally log-off/log-in to see the change:

P.S. As I was doing research for this answer, I noticed that taskbar properties in Windows 7 have also lost the generic preview that existed in Windows XP & Vista.

I think you question cannot be answered without looking at the larger context. The task buttons serve two major purposes:

The first purpose is only relevant for users who use the mouse to switch windows. If the user uses Alt+Tab to switch windows, it makes no difference how many mouse clicks it would require. This means that discoverability may be more important than efficiency, since the power users might be using the keyboard anyway. The key words here are "may" and "might". It depends on the user base.

It is worth noting that the trade-offs for the operating system are different than for most applications. A user is likely to use Windows for pretty much any task at work and at home. This means that the user is much more likely to learn keyboard shortcuts and conventions.

from my point of view, if the TASK BAR is wide enough to tolerate all the APP icons then just display them ! no need to group these into one. but on the other hand when we are confronted with the TASK BAR space issue, then what you are talking about is definitely very helpful.

to me it depends more on the context.

Not the answer you're looking for? Browse other questions tagged icons windows-os window or ask your own question.

1
Legal stance on using application icons within our product
50
Should I provide feedback from a save button?
4
How to display a countdown timer?
172
Do people really want to look at multiple windows at once?
21
What happened to "What's this?" help?
12
Why is it an industry-standard to have a window automatically grab focus and how do we change it? (in Windows at least)
1
Keeping users in context with modal window or shifting user to another page
1
Standard for using the system tray?