Has Fitts' Law been adapted to Touch screens?

The question Is there any difference in element minimal sizes on 10 and 24 inch touch screens? made me wonder; has Fitts' Law been successfully converted to Touch related events? There's 3D movement in touch events and certain types of rapid movement are easier in Touch from my experience, so I definitely think it's not directly compatible with the original Fitts' Law as it's designed for 2D movement.

Has any approximation (however rough) been made for Touch? I've found the question Fitts' Law, applying it to touch screens but there's really only info on why Fitts' law doesn't fit, not any alternate algorithms/etc.

Note: I know there are assorted guidelines related to the size of elements for Touch, but I'm talking specifically about an analog or adaptation of Fitts' law relating to ease of pointing as a function of size and distance, not just minimum size suggestions etc.

research touch-screen fittslaw
Share
Improve this question
edited May 23, 2017 at 12:39

Warning. This turned out to be more of a rant than an answer. Feel free to downvote it, I'm just glad to (finally) get it off my chest :-P

I usually get both eager and upset everytime I stuble upon advanced UX topics, like Fitts' law.

Eager because I find the basic research very interesting, and upset because there are so many misinterpretations of these.

I actually have my own version Fitts' law:

Don't use Fitts' law as a formula, use it as a guideline.

So, what is the simple guideline we can use from Fitts' law?

Heck, low level estimation methods like GOMS+KLM doesn't even bother to calculate Fitts' law. They did it a couple of times and concluded that every mouse movement takes approximately 1.1 second (excluding click).

So, what is Fitts' law, really?

In plain English, the model describes that a movement consists of several controlled micro-movements. The time it takes to perform a micro-movement is equal to the "feecback-loop"/"reaction time". Take a look at MHP for more information about this. The "feecback-loop"/"reaction time" includes observation with perceptual (visual) processor, evaluation of position (cognitive processing), and then performing a (new) movement as a response to the evaluation.

There are several ways to calculate the reaction time. You can for instance do it with an online test.

So, each micro-movement takes about 240 ms, and during the first 70-80% of total movement you can move pretty fast. During the last 20-30% you need to slow down to be able to hit the target accurately.

Fitts did a lot of one dimensional tests and proposed a formula to represent the math behind this movement.

OK. You probably just skimmed over this list, but look at it again. Read and understand every piece of the formula. I'll help:

I had a couple of additional points I wanted to add...

First. I should put all the information above into a conclusion that actually answers your question. When iPhone was introduced, Apple had a guideline that suggested 44 pixels to be the smallest size of a button. The resolution back then was 320x480. So if you put two 44x44 buttons in each corner diagonally, then you get the most difficult task. By using Shannon's formula, we get an Index of Difficulcy equal to 1.38. That is very easy! When Fitts experimentet he used ID=16 as the most difficult task... 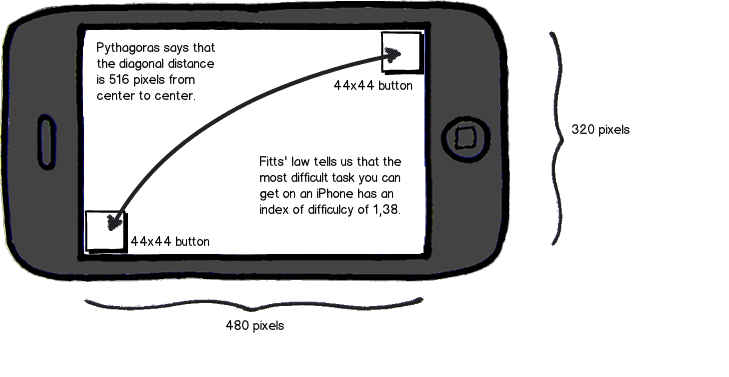 Second. For the fun of it, I created a small tool to calculate ´a´ and ´b´ for you. You can run in you browser or you can run it on your phone. The chart obviously needs some work, but the result you get is correct. Chase the button 20 times and get your result.

Goto http://smartmobilestudio.com/smartdemo/Fitts/
or scan the QR code below to get started.

In Designing Gestural Interfaces, Dan Saffer touches (!) the subject of Fitts' Law in relation to touchscreens (specifically pp. 40-2.) Saffer argues that the law holds true for gestural interfaces; minimize reaching across the interface and making sure that targets are appropriately sized to accommodate the "cursor" (i.e., the finger.)

However, he also notes that touchscreens are seldom subject to the benefit of the "inifinite edge":

One corollary to Fitts' Law isn't as true for gestural interfaces. With traditional input devices such as a mouse or trackball, it makes good sense to place targets such as menu items on the edges of the screens so that the hit target becomes huge because the user cannot overshoot the target; the cursor stops at the edge of the screen. With gestural interﬁaces, this is rarely true. With touchscreens, users are seldom dragging their ﬁngers across the screen as they do with a cursor—instead, they will likely lift their fingers and place them on the new target. And with free-standing gestural interfaces. there is seldom an "edge" to bump into, unless it is a physical wall!
(Saffer 2008, p. 42)

As you can see on its wikipedia page, Fitts Law goes well beyond 2D movement (and HCI in general).

What's known as Fitts Law originates from a (military) memorandum written by P.M Fitts in 1947 (warning: pdf link) that deals with ergonomics of WW2 airplane cockpits, and how the layout of instruments, their scales and the directions of their indicators may confuse the pilot thus yielding "pilot error" (between quotes also in the original document).

Later (in 1954) a paper by Fitts studied not only the perception issue, but the interactions as well. (again warning: pdf link) In this paper one can find many examples, as for instance:

In the first experiment two closely related reciprocal tapping tasks were studied. The 5s were asked to tap two rectangular metal plates alternately with a stylus. Movement tolerance and amplitude were controlled by fixing the width of the plates and the distance between them. The task was accomplished primarily by movements of the lower arm

Yes, the Fitts' paradigm has been converted to touch related events.

Bi, Li & Zhai (2013) proposed a new version of the Fitts' paradigm's Index of Difficulty. However, I have not found reports stating experiences from others with this model.

Basic Fitts' law describes correlation between motion time MT and the Index of Difficulty of the pointing task:

The 'a' and 'b' are experimentally found regression coefficients.

For a more detailed technical description, see the following article.

Disclaimer : This response is based upon my own analysis

I cant find any research studies but the place where Fitts law is applicable in case of touch screens is when the pointing device (in most cases the finger) is required to be dragged across the screen to fulfill a task (for example dragging a app or icon to an trash can).

These extensions of Fitts' Law fit better to touch screens that the original 1D point'n'click task:

Fitt's Law gives you guidance on how to size and position elements to make them easy clickable. In my opinion we should not try to just adapt this to touch screens, but go one step back an ask: How should elements be positioned and sized to be easily touchable.

This depends on the target device. On a larger tablet the reachability of elements in the center of the screen is not the same as on a smart phone.

Not the answer you're looking for? Browse other questions tagged research touch-screen fittslaw or ask your own question.

8
Is there any difference in element minimal sizes on 10 and 24 inch touch screens?
4
Why isn't a keyboard in alphabetic order?
4
Fitts' law and minimum target size

10
Smart phones, touch screens and the "Gorilla arm effect"?
10
How do users learn about various gestures that are used on touch screens?
12
Applicability of Fitts law in expert user scenarios
4
Fitts' law and minimum target size
4
Why has the touch area size of iPhone app icons not been maximized?
0
Are touch-start and touch-end (i.e. Mouse-down and mouse-up for touch-screens) intuitive?
76
Why touch screens?
1
What defines the acceptance of fingerprints/smudges on touch screens?
1
Acceptable to use Google's material design forms on touch screens?
2
Combining Fitts' law with Hick's law