"Adding and Subtracting a Value" is Horizontally aligning the controls less effective than Aligning Vertically?

I am working on a project, where we are trying to squeeze a user interface equivalent to the complexity of a NASA command centre into a 14" touch screen, and we are running out of horizontal spaces trying to squeeze vertical "+" and "-" control while trying to keep the whole category in one horizontal plane.

so we are experimenting with horizontal placements of "+" and "-" has anyone had experience with this layout? is vertical placement better affordance than horizontal? 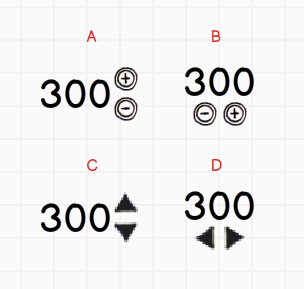 Why I would prefer the vertical alignment:

In my personal opinion (which I cannot back up by any research), the vertical variant would be just a tad more intuitive:

If laying out the numbers on a horizontal vector though, further right could make sense.

With that being said, I would assume that the actual real-world difference between vertical and horizontal layout is negligible.

What matters much more than alignment:

No matter if you decide to use the horizontal or vertical variant, keep grouping in mind, as in "what button modifies what number".

Particularly if dealing with a crammed panel full of different indicators and buttons this becomes vitally important (and is often overlooked).

I'd suggest using + and - for the labels, as long as the value that is being modified is a number. Frankly, this is as intuitive as it gets.

Keeping all that in mind, here's what I'd go with: 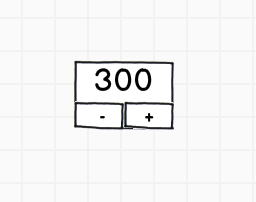 Another option worth considering would be to show only the number by default. On touch/long touch, you could then do either of the following:

The viability of these methods of course depends on:

A great way of implementing dials is found in the Figure iPhone app (watch the video) by Propellerhead. It has a great UI in general but experience of changing the values is really nice. Look at how they do the circular controls at the top that are changed by sliding up and down. This might be closer to what you need to save space and make it more intuitive/appropriate.

Considerations
The only problem with their interface would be if you need a very precise number in a large set. For instance 345 in a range between 1-500, this is hard to do on a slider, but even more tedious with your +-1 increment.

And actually that is my main problem with the increment pattern you are currently using, you can only step +1 or -1 at a time, is that a good experience when going from 0 to 29?

Contra to @Yallow, these are people whose expertise will probably be in other areas, and, I suspect, they will not want to learn new interfaces. The horizontal ones do not work as well for me as the vertical ones ( because the vertical ones indicate changing the values "up" and "down", I guess ), so these would be preferred. What is more, the horizontal ones take a moment longer for me to work out which is which - that may just be me.

But I would also expect that the target audience can learn how to use the horizontal controls, if there is a need to take this route. The downside is probably less than for a general population. If you have - as it seems you have - good reason for making them different, then do it. In this case, I think the benefit of being able to fit the controls horizontally may be more significant than the change buttons being slightly different.

How about going for a totally radical solution and not having any controls at all?

When users click on the cell and slide sideways the cursor changes and sliding the cursor right and left makes the value goes up and down.

Bret Victor does this in his visual explanations: http://worrydream.com/TenBrighterIdeas/

So for example here as the user moves over the interactive numerical value the cursor changes to a selector cursor and the user can slide left or right. I can see this working well in a touch environment: 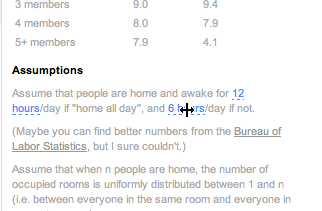 He also uses sliders that pop up on hover:

You can increment sliders or allow fine tuning by lots of different methods. For instance you could give users control over the increments via a single setting in a menu or tool at the top of the window or short cuts.

There are a couple of issues with applying this technique to touch - all of which I think could be overcome with careful desigh:

This solution would certainly save you considerable space and "visual clutter". I think it would be very learnable especially if used in an expert environment.

Another resource I would highly recommend for designing layouts sorts of displays is Stephen Few's excellent website: http://www.perceptualedge.com/

There is lots of advice on dashboard design there and a great discussion forum.

One of the first steps that I take when designing a user interface is getting to know the user. From what you indicated with this project being for NASA, that is a good indicator that you are designing this for a rather trained set of users where the use of vertical vs horizontal won't make much of a difference.

All four of these options are relatively intuitive and do not take much thought to figure out as long as you adhere to Gestalt's Principle of Proximity. That is the main principle that you have to keep in mind when designing something with lots of functionality.

Not the answer you're looking for? Browse other questions tagged affordance intuition or ask your own question.

12
Does briefly showing advanced search options on page load increase their use?

23
Is there a difference between affordance and discovery?
4
Click and drag affordance