Is it intuitive for a "yes" or "no" button to proceed to the next step automatically in a wizard?

I am designing a wizard with 4 steps in it. To make the screens more appealing and easy to click through I converted the radio buttons into big buttons, but they still function like radio buttons in that when you click on a "no" button, then the "yes" button becomes deselected (and visa versa).

Would it be intuitive to progress to the next step automatically when a user clicks on "yes" or "no"?

The complexity comes in on some of the other steps where there are up to three questions with three sets of "yes" and "no" buttons. So in that context the user will not proceed to the next step automatically by clicking on a button, unless they only proceed once they have answered (clicked) on all the required buttons.

My gut says that the "radio buttons" should function consistently throughout the process, but it feels like an effort will be put on the users to have them click on a yes or no button and then on the next button to proceed to the next step when there is only one question with one set of "yes" and "no" buttons.

I'm also thinking about what would happen if the user wants to change their mind on an answer when they have proceeded, which is why there is a back button.

Here is an example of what I am talking about:

You want to keep it as simple as possible. The way you have it with the 'Back' and 'Next' buttons requires additional thought by the user as you have realized ("why do I need to press two buttons for each question - yes and next?")

A possible solution to this is to allow them to go back directly to previous questions if they want to make a change. Also, as they're only Y/N questions you can show a summary and the answer to the previous questions all on the same screen, with an option to 'change' responses in that section should they wish to. That way they're getting a full picture of all the questions they've answered so far. Once they've answered each question in a section then you can open up the next section for action.

The only issues you may have is if the further questions depend on the answers you've given to earlier questions - in which case jumping back two questions could invalidate the last question you answered. Also, if the wizard is particularly long this approach could get untidy (but I've based my wireframe on an assumption it's not so busy based on your own design) 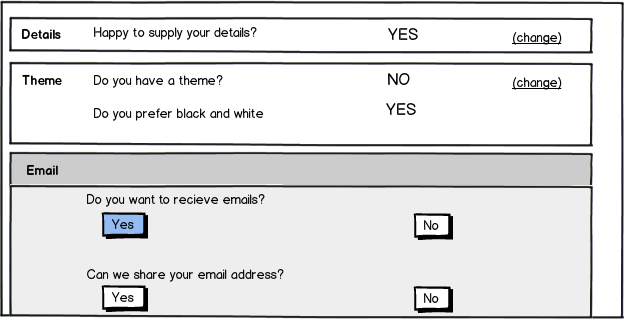 Any time that you as the designer have to ask the question "Is it intuitive"... it's not. Keep it intuitive, keep it simple, use existing conventions in your favor. Users know the function of Radio Buttons. They are a intuitive convention. Use them. Do not add confusion to users by reinventing the wheel.

I would say no. I would expect the 'yes' button to surface a form asking for email details and, once that was done, the 'next' button would go to the next stage.

That said, if you must ask for email details in a wizard, why not just put the form on the page up-front with an opt-in label and just have 'next' button complete the function?

It could read "Please email me details etc. etc...." underneath would be a text entry box labelled "enter email address"

Clicking next completes the process, and if they don't fill it in it's a tacit 'skip' request. Not perfect but much simpler.

I am afraid that automatically progressing upon answering could cause more problems than not.

The user needs firm confirmation of the answer they selected. You'd need to have a delay between choosing an answer and seeing the next Q. to assure the user they have made a selection. The timing is crucial. Too long and they will start clicking around!

People change their mind, confer, and make mistakes. Forms usually allow for this by allowing the user to choose when to progress. Does being forced to progress as soon as answering make it seem like a game-show?

You cannot go wrong with NEXT and PREV. Its normal, existing and confirming.

You might save one click, but you are mildly assuming that users are very sure of themselves and are desperate to plough through.

I would say no. I think a checkbox would fit nicely. This would be better, in my opinion, for a couple reasons:

4
Use of Radio Buttons (Identification Context)
5
On a form wizard step what input type/s shall I use for when there are two options?
10
In a wizard form, should the data be saved to the server at the end of all step or at the completion of each step?
1
Best approach to presenting collapsible/expandable panels with radio button headers
2
Sub-steps navigation and positioning in wizard
2
Lots of buttons with user input if none are applicable
3
Wizard with optional steps
0
Navigation between steps on mobile form wizard, automatically or scrolling to "next" button?
0
Back button in wizard