The dominant UI pattern for pagination involves a list of numbers.

sometimes including a "+10" link, and/or a "jump to" numeric text field.

Some elements of this pattern seem "fishy" to me:

My first question is:

Is there any user research supporting the dominant UI pattern? Are all the elements equally necessary for effective navigation of paginated tables?

The question becomes critical on a mobile browsing context, given that prevailing touch interface guidelines recommend a minimum of at least 26px (at 164ppi) - though Apple recommends at least 44px.

Getting that pagination pattern to conform to those interface guidelines takes up a lot of screen real estate.

So, the second question is:

Which part of this pattern can be safely jettisoned, in favour of bigger touch targets? Can, for example, we safely abandoned the list of numbers in favour of including a user-driven "Go to page" menu listing all page numbers?

The wireframe below is one possible alternative pattern which avoids the fishiness above, and has 40x40 px targets. 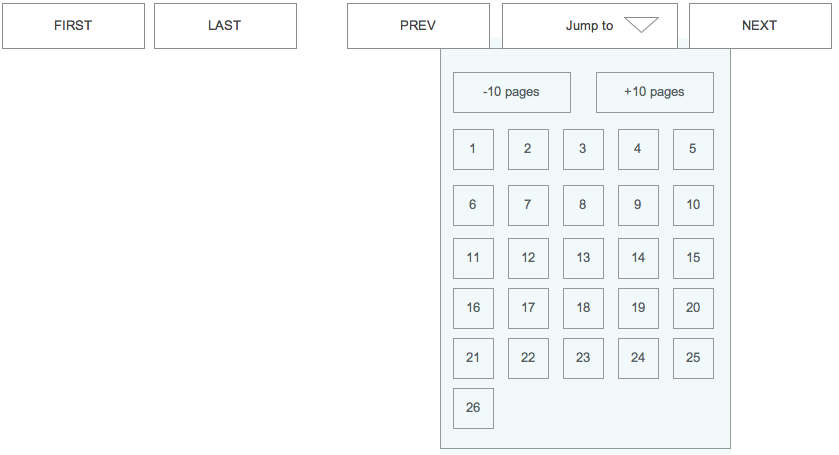 First of all, on a mobile experience, don't give the user too many things to choose from. A grid sounds nice but, as someone who is new to the whole touch thingy - I'm going to be starring at it for a few minutes before i figure it out.

here's a simple pattern i use for pagination. its user friendly (in most cases) and my developers love me for not going overboard (with features) for a simple utility on a page. 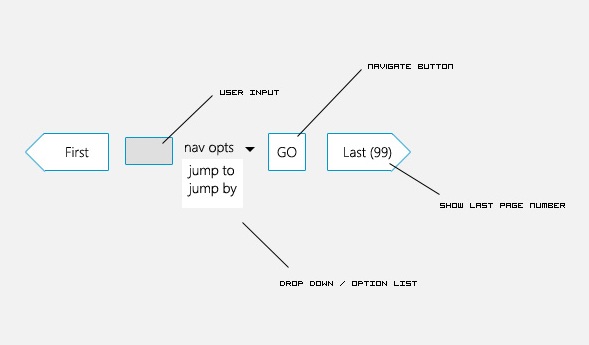 I'd go for some kind of horizontal slider rather than the menu with all the page numbers. That would have the benefit of showing you visually how far through the results you are, and also let you skip forward and back by small or large amounts. Even better would be a vertical slider on the right of the page as that's the direction the page will likely be scrolling. A kind of scrollbar-paginator - but one that allows you to skip forwards/backwards by a large amount, rather than a lazy-loading infinite scroll idea.

While I agree with your issues about the commonly seen paginators, I don't know how intuitive your design would be.

why paginate when you can accelerate and scroll fairly quickly to exact desired spot with a pattern like the contacts or music on iphone. pagination is mainly used on desktop because scrolling is far inferior than on touch interface.

I've been looking at the same issue for our sites. The pagination patterns I used 10 years ago are pretty awful in mobile. A quick look at some US catalog sites show several different approaches. The simplest version would probably be a display of the number of results, or pages, and a "Load More" button. The trend seems to be stripping away precise pagination controls in favor of basic type controls. See examples below.

Not the answer you're looking for? Browse other questions tagged mobile-web pagination or ask your own question.