How large should the active menu area be?

Here are two similar examples of a typical menu bar.

What would you expect as an active hover area for click? Should it be the same or different in these two examples? Does the device matter? What do you think? 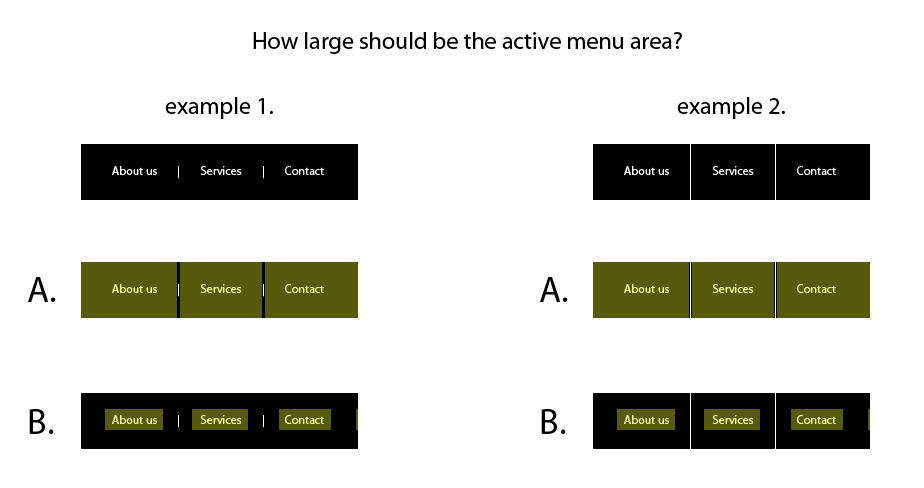 Given this principle, I would suggest you go for option A in both examples.

It is worth noting, however, that A only holds in example 1 because the container constrains the area that could be a link - in a larger area or an area where the container isn't distinct from the background a user might expect the interactive area to only expand to cover the single line of links/dividers.

In the following example there is no obvious vertical constraint so users might expect only to be able to interact with the element as its height is visually defined by the vertical bars:

Definitely A. This style of menu bar is emulating a basic button and a button includes the padding. Also, the bigger the hit area the easier it is for the user.

There was a study that was conducted which determined 13px x 13px minimum optimum touch-point.

Didn't find the doc. But a potential google hit.

Hope that helps. All the best! Nash

Not the answer you're looking for? Browse other questions tagged menu hover size or ask your own question.

3
What does the user want to do to see a menu? Press a button? Hover?
7
Dropdown navigation menus - should top menu option link to content?
3
Standards or examples of graphically combining hover and sorting, in a column header?
26
How to handle "consistency" when the meaning of the word isn't…consistent?
2
Link states – should keyboard focus replicate hover or active
7
Toolbar position relative to active menu item
2
Shopping cart interaction: how should the user check out?
3
Large Hover Menu/Navigation Menu - Categorically Bad UX?
1
Should buttons appear on a menu bar?