Any data available on using Skeuomorphic Design in apps?

I've recently come across an article about Skeuomorphism that peaked my curiosity.

Skeuomorphism: ..."an element of design or structure that serves little or no purpose in the artifact fashioned from the new material but was essential to the object made from the original material"

It is a design style that you would be familiar with in the Apple world of apps where these apps look like the real object (Like a REAL calendar or notebook).

Now there is a lot of opinion and strong feelings for - and against Skeuomorphism, but very little data I could find on it's usability or effect on users.

The article, SKEUOMORPHISM & STORYTELLING, where I found this suggests:

"There are some usability benefits with skeuomorphic design that are often touted. In iBooks, for example, Apple makes it obvious by using a book metaphor that you should swipe your finger over the pages to flick to the next page."

It then goes further and states:

"Skeuomorphism is about communcating and reinforcing feelings – getting an application to become a memorable experience, not just a tool. It’s about communicating the purpose of a UI, not only the functions it enables."

On other sources I have found that people don't agree or think that this approach is good as it hinders the UI by getting in the way, it stops innovation and/or design.

Do you know of any research data to support or challenge the use of Skeuomorphic Design in apps?

Remember - I am not looking for an opinion, but rather data to back it up.

SKEUOMORPHISM & STORYTELLING
UI Guidelines for Skeuomorphic Multi-Touch Interfaces
On Apple’s Skeuomorphic UI Textures
Apple's aesthetic dichotomy
Synthesizer 76 iPad App Shows Delights and Pitfalls of “Skeuomorphic” UI’s
Skeuomorphic Design: What it is, Who uses it, and Why You Need to Know
Closing The Book On Apple's 'Cheesy' GUI Metaphors?

I don't have studies, so in this sense my answer isn't a real answer, I just want to provide some historical context and uncover an important side of this topic as well.

In the end of the 90s, when UX was just about to be born (as our computing capacities erupted with screens with more than 256 colors and 640x480 pixels), one of the schools of ergonomy was to try to make apps have a "real interface". Music players, faxmodem interfaces, photo organizers all tried to have a "real interface", or a skeuromorph one as we'd call them today.

In 1999, there was a big question for months on how real should interfaces look like, the most famous and widely linked critique was that of Apple Quicktime's from the Interface Hall Of Shame, (do look at the related articles at the bottom!), and they did review other interfaces like this, this and this

Today: Our environment gets more and more digital.

The immediate consequence is, that something can be "skeuromorphic", if it looks like facebook, for people between 15 and 35: simply they've seen facebook many-many more times than they did see a physical diary for example.

This is the reasoning behind the Metro interface, or design language, or however they call it. I won't dissect this part, the links from the questioner do, so does Joel's answer.

Yet, skeuromorphism also has subconscious aspects: we know that people tend to view something "clickable" (available) to press if it stands out of its surrounding surface, that is, it has some shading and casts a bit of shadow. (details in the Weinschenk book for example)

It's a good question wether it's a learned ability through interactions with our environments, or it's something truly instintic. (See the nipple thread here) Perhaps when these tests were made, babies were already handed with beep-on-press toys for decades.

Perhaps we expect buttons to look like "buttons" because we grew up on remote control to switch between the Disney Channel and Cartoon Network, and those button looked like these. 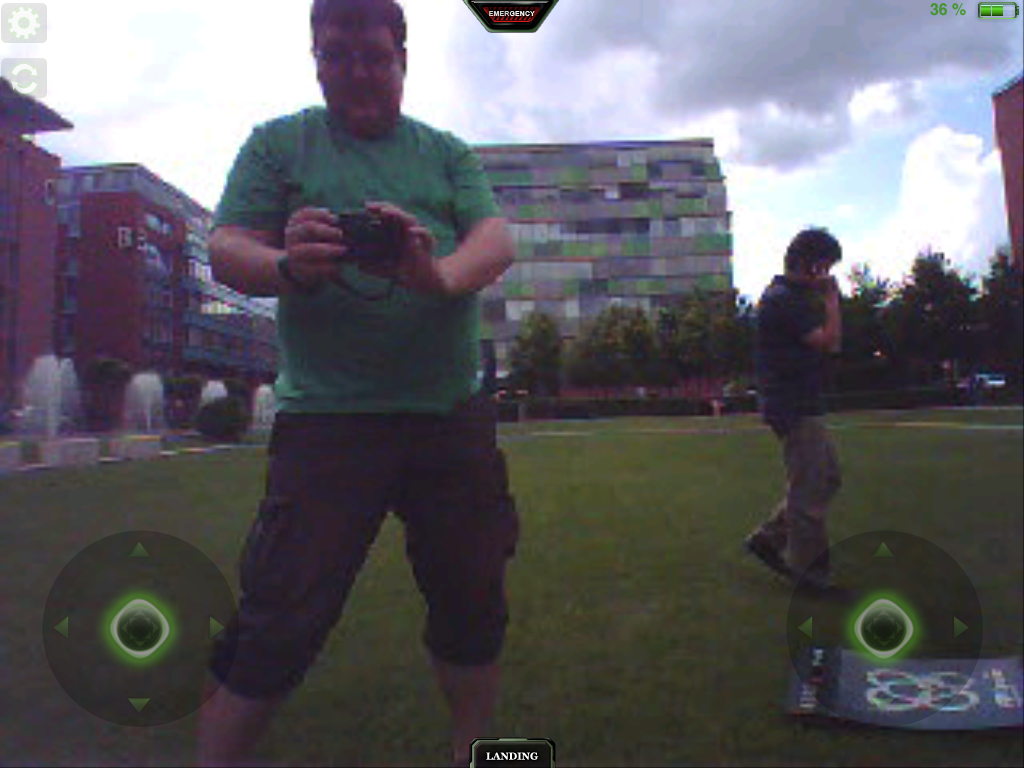 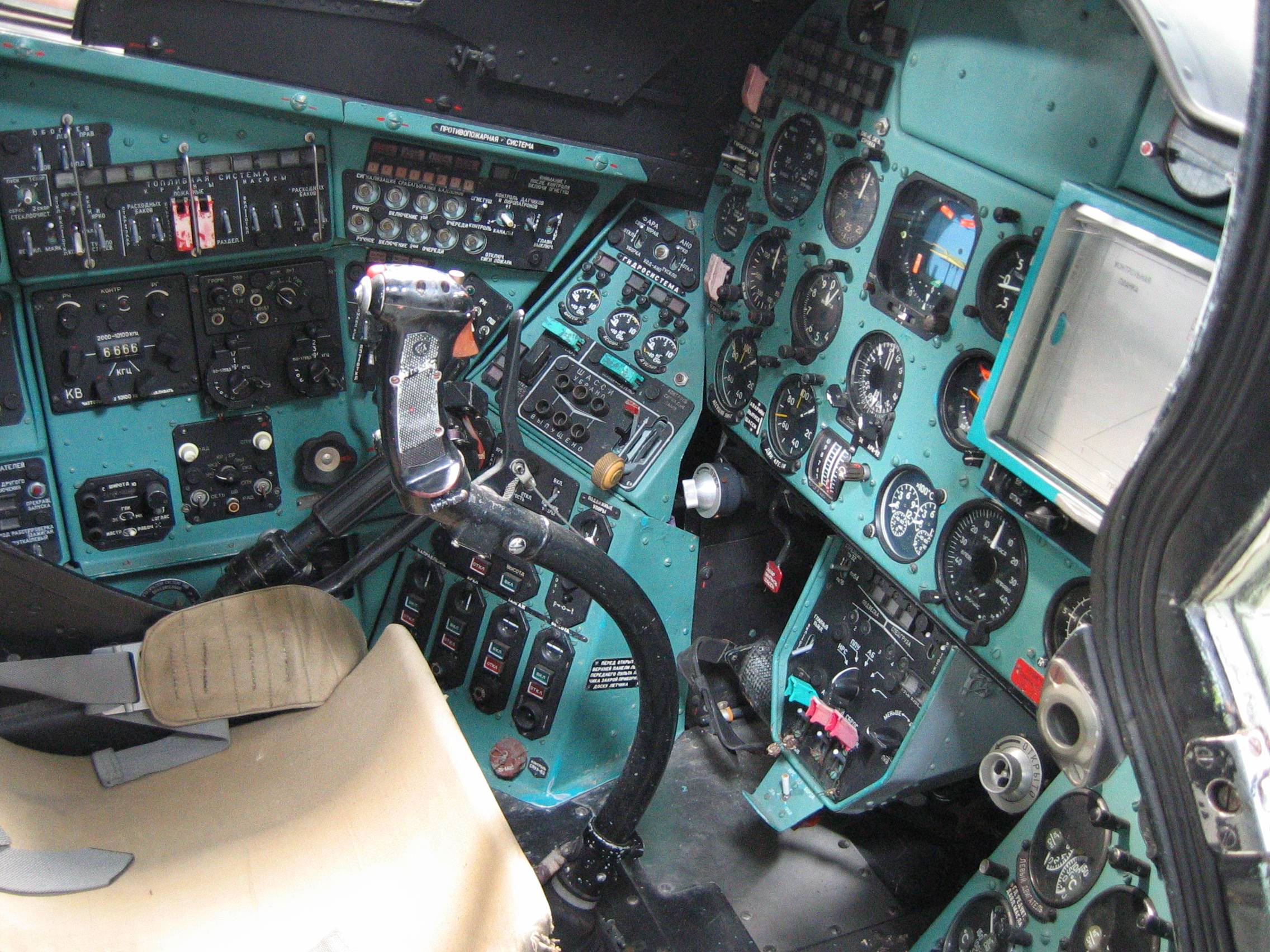 An MI-24 helicopter cockpit: surely this would be much more skeuromorphical, but how am I supposed to fly this stuff??

If the AR Drone brought a "skeuromorphic" cockpit to the iPhone, it wouldn't be so popular. I'm sure senior commercial pilots would be able to fly it, as they're quite used to that interface, but for me, it means nothing. The last time I sit in a cockpit was when I was 6 years old, and obviously I wasn't to start the plane (an old IL-18 - perhaps it'd be easier with an Airbus, I mean, it's just "press Take-Off", right?;)

But AR Drone was built for beginners in quadrocopter modeling - this model costs about 300, while a more professional vehicle, like octocopter XL can cost up to 3000. On the other side, I've seen Microsoft Flight Simulator maniacs who basically built a Boeing 737 cockpit out of cardboard and tried to make it work as much as possible.

So, you can be skeuromorphic only against set expectations I guess: if the user has never used the "real thing", nor any of the things its visual language is built upon, or there was no such thing before, there's no reason to be skeuromorphic at all.

Sorry that I couldn't find real studies, but I hope this also helps to set certain questions.

User interfaces are usable when they behave in the same way that a user would predict they behave.

Skeuomorphism can be used to teach a user how a user interface will behave, for example, by making buttons pop out visually so it appears as if the right thing to do is to press on them. This is what Don Norman called affordances -- a pop-out button affords pushing, just like a pull-handle on a door affords pulling and a glove affords putting it on your hand.

A metaphor, skeuomorphism, or other visual affect can improve a user interface if it helps users predict how it works.

It will hamper the user interface if it does not help the user predict how it works, or, worse, if it is downright inaccurate, for example, if it creates the illusion that something should be possible which is not actually possible. I can't think of any examples of this off the top of my head, but imagine that you put a visual representation of a zipper in your user interface that was purely for decoration and was not operated by dragging the tab up and down.

Much of the discussion around this topic lately has been more about style and fashion than usability. Specifically, Apple has made an aesthetic choice of using increasingly realistic visual representations of things in the world, mostly for stylistic reasons, not for usability reasons. Microsoft, in their Metro user interface, has reacted against this by stripping away all real-world artifact.

From the reports I've been hearing, the Windows 8 / Metro user interface is extremely confusing to newcomers who are consistently unable to perform basic tasks because the old affordances have been stripped out, and new affordances left out of the design, in a misguided attempt to set a new fashion standard. The most common thing I hear from people attempting to use Windows 8 is "there is no way I would have figured out how to do that!"

(I didn't answer your question about whether data is available, because the concept that correct affordances enhance usability and faulty affordances deter it is such an axiom of usability design that the literature is full of it; I remember seeing data supporting this dating back 30 years and it's so self-evident to everybody working in ergonomics and usability that data is almost beyond the point.)

Not the answer you're looking for? Browse other questions tagged usability web-app research design skeuomorphism or ask your own question.

264
Save icon, is the floppy disk icon dead?
37
Is it true that "the only 'intuitive' interface is the nipple"?
3
When is Skeuomorphism appropriate in an iOS app?

12
Case studies on using gradients in a design
17
What are the pros and cons of skeuomorphic design in payment transactions?
33
Any Research on User Experience Perceptions of Native Apps vs Web or Hybrid Apps
1
using subtle animations for page transitions in single page apps?
0
Design using data instead of design with data
1
Is making something "printer-friendly" skeuomorphic design?