What are good UI Visualizations to show in a grid for ranking activity?

I have a grid with a list of runners (one person in each row) on a webpage. I want to show some visualization in a column to represent how much they have ridden in the last year. Right now I am just showing a number in miles as text but I thought it would be cool to show some visualization to represent and compare. I first thought of a a progress bar but that doesn't seem to work as there is no maximum value to scale to.

Any suggestions for visualizing comparison fields in a column in a grid?

There's an opportunity here for a little bit of fun, learning, and dare I say it, gamification.

The problem with showing distances is - it's just a number. It needs a relationship to make it real.

I'd recommend using a scale which is independent of other runners, and also introducing a little bit of fun facts into the visualisation - something that's meaningful or interesting - something that people can relate to.

So here's an example - you could show the distance as equivalent to riding the width, height, length, circumference of one or more of the US states, like in the example below.

This adds an element of interest in that it might be a challenge perhaps to do the equivalent of riding across the whole of the US. Or there could be an element of wanting to see what the next increment of distance might display. Will it be my favourite state? Will it be Florida? Is it were my brother lives?

And there's a sense of achievement of having ridden a distance that is akin to the real world. It could even be integrated with a twitter button: 'In the last year I've ridden the equivalent of ...'

The obvious answer is to scale the value by the user who has ridden the most in a year, ever. If your maximum is '500 miles', and someone has ridden 50 miles, their bar would be about 10% full.

If this statistic is very important, one interesting way to display it would be to have a background bar-graph, like so: 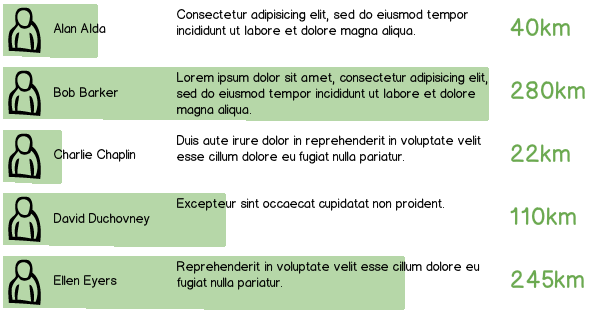 I think using horizontal bars like "progress bars" as you described them is a good idea along with @Myrddin's suggestion to automatically set the scale of the bars based on the longest distance. Most charting tools (e.g. excel, google's charts, etc.) will do this by default so you're viewers have probably seen this scaling before and will be familiar with it.

However, the one thing I would add is to rank them: That is, to sort them from top to bottom based on the distance. Something like: 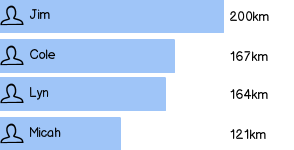 I think @Roger's suggestion about equivalencies might be a nice addition too, but the simple bars would undoubtedly be a good start and I wouldn't remove the bars in favor of equivalencies. As bar graphs are recognizable and instantly understandable by pretty much everyone, so they add a lot of value because of that.

Not the answer you're looking for? Browse other questions tagged website-design info-visualisation grid comparison or ask your own question.

6
Interaction with a grid with complex cells
10
What are Good Techniques to Visualize Binary Differences?
4
Replacement for Grid or Table Data Visualization for Mobile Apps
7
Interesting visualizations for a personnel in-out control
2
UX for specifying & showing mutual exclusive pairs in a group
2
report authoring workflow for non-technical users
1
Designing show/hide flow for admin
0
How to show long path within table cell?
0
Best way to show Readonly and Writable cells in a grid?
0
Go back to the Grid view and show the grid and the subgrid already open