Which is the best way to select a language from 400 possibilities?

We are defining a language selector for 400 languages. Given the massive number of languages compared to other websites, we applied several mechanisms to reduce the complexity of the language list. The current design is shown below. 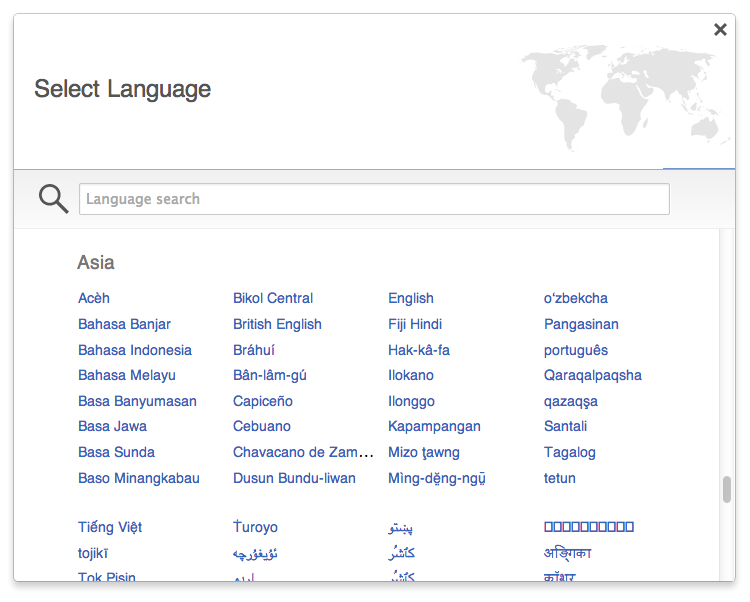 The mechanisms applied are the following: - Provide a short list to anticipate user needs. A list of six languages is provided based on the browser settings, the geographic area of the user, and previous selections. If the language is not in the list, the user can access a larger list of languages with the aids listed below.

More context information can be obtained from the project website.

Considering that language selection is a mechanism with a transient posture and it should not interfere the main flow of actions from the user. Is there any other mechanism (or combination of such) that can help to reduce a long language list with minimal distraction for the user?

It's not a complete answer to your questions, but you should at the very least default to the language specified in the Accept-Language request header. That header will give you the language(s) the user's browser is set up to use (in order of preference).

The flexible search sounds perfect... except that there's a chance the user can't read your instructions to search for a language, so a map is a great backup. The map should be able to zoom in to a country level, since continents have so many languages.

Not the answer you're looking for? Browse other questions tagged lists language internationalisation or ask your own question.

25
Choose Your Country: Best Usability approach
2
What is the best way to ask/set language preferences without using text?
191
Language of language names in the language selector?
5
What is the best mechanism for language and country selection?
1
Best way to represent multiple foreign language selections
2
Best way to set user language
1
Website region selection on first visit
2
What would be an appropriate visualization for the arabic language?
3
From UX point of view, what is the rationale behind using location of device to select web-site language instead of device's language settings?
4
Language option translation best practice