Why aren't text messages viewed on the iPhone iOS displayed at full width? I can think of several reasons why it would make sense: 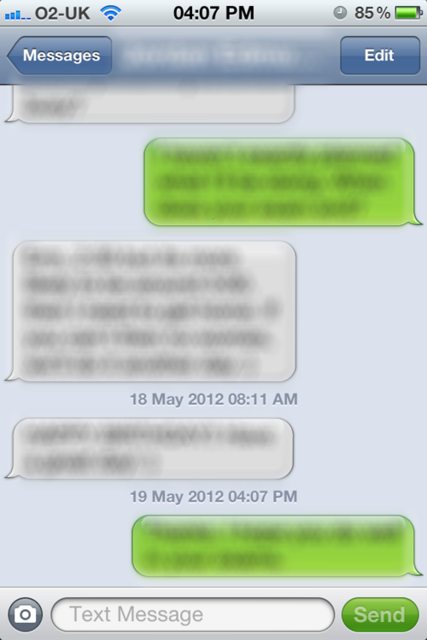 Because whitespace is important. Being able to quickly skim the list and pick out who said each response is important. By adding left and right whitespace it makes the list of messages far easier to scan. It also makes the application instantly accessible from the very first sight; if it were just white and green with no justification, then people seeing the application for the first time would still be confused.

Edit: Returning years later to expand upon this.

99% of text conversations are between two people, not groups. In messaging apps where group discussion is common, just picking out your own comments is not a great reason to reduce the readability in all the ways pointed out in the quetion. But when the conversation is between two individuals, the value of separating the two parties visually becomes more valuable than the readability of the paragraphs themselves, especially when the majority of messages when texting are very short and are unaffected by the shorter format.

What's done here (in contrast to the administration of single messages in an inbox or outbox) is to show all messages between you and one other person in a chronological order - this establishes a relation between single messages, illustrates a dialogue and finally is a really useful feature.

As a metaphor, speech bubbles as in comics are utilized. With some adaptations as e.g. showing messages below each other (not next to each other) which is necessary to put emphasis on the chronology and of course because of the limited screen width.

I agree that the "whitespace" is necessary to clearly represent this metaphorer and to differentiate the directions (incoming / outgoing) or "actors" (me / counterpart).

It's mimicking a side perspective of two people facing each other having a conversation. Each person on one side of the phone. The less white space you have, the less you know who is talking.

Not the answer you're looking for? Browse other questions tagged mobile iphone ios white-space or ask your own question.

2
What is the optimal text size for an iPhone 'News application'?
11
Why do my / sent text messages appear on the right of the dialogue?
3
Why does iOS (iPhone) flip to show the home screen when installing apps?
23
Why does the iPhone calling screen have letters under the numbers?
4
Ipad/Iphone designing in Full-Screen vs Non-Full-Screen?
1
Action buttons for mobile -- ok to go full width?
8
Should forms be aligned left or center, if less than full page width?
4
Why doesn't the calculator in iPhone have a backspace?
2
Full-width dropdown vs left sidebar on mobile