I'm building a photo site that must allow users to manage thousands of photos via paged thumbnails on a big desktop. I also want to offer a touch interface that is both usable and delightful on the iPad.

Is there a best practice for translating right-click context menu options on the desktop to a touchscreen device?

On the desktop I have the following events on the thumbnail:

In most photo apps I know there the tap+hold or longtap event that triggers some sort of contextual menu with further options like export, mail to someone, etc. Look at mobile safari for instance. Tap and hold on a link and an action sheet with some actions appears. This is used widely in apples apps. You can see that in safari on the "+" icon (favorite), in mail when you tap the arrow button (reply, forward, etc.).

Refer to iPhone email app: it allows users to manage a lot of mails. Its UI pattern may help.

First you tap "Edit" button, then you tap each photo you like to manage, lastly you tap one of the options located at the bottom of a screen. 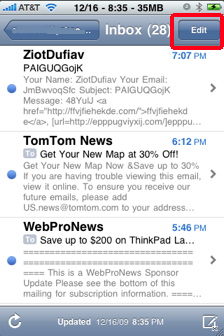 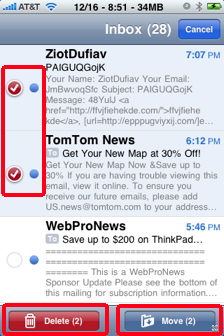 I would recommend two actions: 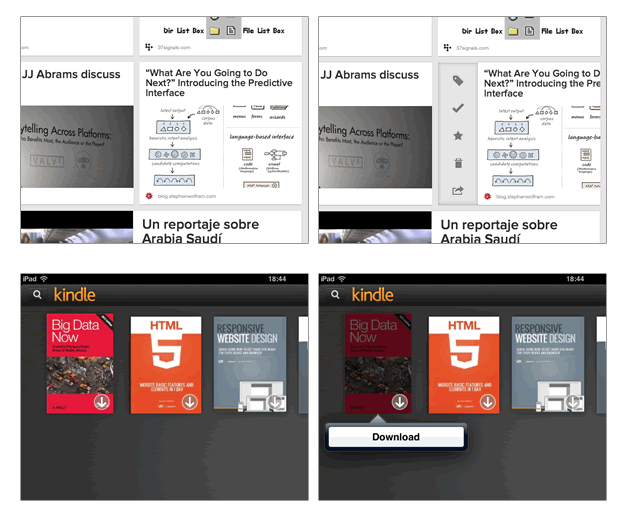 The Facebook app (for Android and I believe iOS as well) has this behavior down pretty well. Tapping on a thumbnail brings up the lightbox, tapping the image again toggles the data overlay (i.e. likes, comments on FB but title, score, ratings in your app.) Tap & hold brings up a context menu. This has been fairly intuitive to learn and seems consistent across other photo/camera apps I've used.

What “contextmenu” ? Do you know that the contextual menu is governed by the Web browser, not by the Web page ? I hope that, on your site, your “contextual menu” is not the only way to reach its actions. Otherwise, these actions are not accessible and your site is broken.

At first sight, I thought you were building an iPad app. That may be the best to do.

On the iPad, the contextual menu exists, the user gets it by keeping the finger pressed. It is handy. I use it often.

This is how I believe your actions would be best translated to an iPad below. I've put extra emphasis on the context menu as that was your original question, but I believe your other actions deserved mention as well.

For an iPad specifically I think you should stick to Copy & Save Image (like the iPad's Photo App) only in the context menu (figure 1) -- although you could have some other actions which can only be performed on one photo at a time, you don't want to clutter the context menu. You may notice in the iPad Photo App most of the actions are right (figure 2, figure 3) until you either start selecting items in the grid view, or until you're in the full single image view. I would try to conform to this convention.

So as for navigation, I would move that out to the navigation bar (or just allow for swiping between images), and for the actions I would move most of those to the toolbar (figure 4). Toolbar actions shouldn't change your current view. As a tip I would say the 'export' type actions like sharing to a social network will still belong in navigation as they technically are exporting you/your content from the app which conceptually is like navigation, not to mention the fact that your view will probably have to change.

The actions that can be for multiple photos at a time can stay in the grid and only be active when a user selects a photo, and the actions for a single photo can be moved to the single photo view.

For the click, I think your general idea still applies, and you should just show a full size image with contextual actions in the toolbar at the bottom of the application, and navigational options at the top in the navigation bar.

These options I would think in your application would be merged with the full size image. Depending on how important that information is to your users, you can shrink up the photo a bit on that screen and always display it but allow the users to still show the photo in full screen mode, or have them tap to display the content associated with the photo as an overlay.

If you would like to read more specifics how to use the navigation bar or other components, I would highly recommend reading Apple's Human Interface Guidelines for iOS.

Note: since you're question is specifically tagged iPad, I've focused on answering within the context of that device and Apple's Human Interface Guidelines.

You can look at references of touch gestures/actions from searching on the forum and see if you want to trigger a menu based on a specific gesture, and Luke Wroblewski's Touch Gesture Reference is pretty comprehensive. I think on apps there might be a standard, but for websites the context menu should be redesigned so that it is not required, especially if you are looking to cater for mobile in the future.

From a usability perspective, I don't see any reason why the context menu cannot be converted into an action button, since the context will be fairly clear when you are clicking or hovering over an image or other parts of the system interface. In fact, somethings the right click context menu suffers from the fact that users don't necessarily know where the focus is when they right click (especially if they have been scrolling or clicking on other parts of the UI). This means that you can make menu options more relevant to the context by triggering it from action icons associated with the image or from a central menu.

There are a lot of excellent answers here (makes me wonder if michael intends to vote for an answer at all). I would emphasize one critical point:
This question all but impossible to answer in general terms.

The transition from mouse to touch is a delicate and multifaceted challenge. No one can give you general guidelines that will answer your unique challenges.

The range of options include

The factors to consider are

The only way you'll get a real answer for your context: Testing. Iterate until the people you're after enjoy using your service. That's what UX is all about!

Not the answer you're looking for? Browse other questions tagged navigation design-patterns touch-screen ipad contextual-menu or ask your own question.